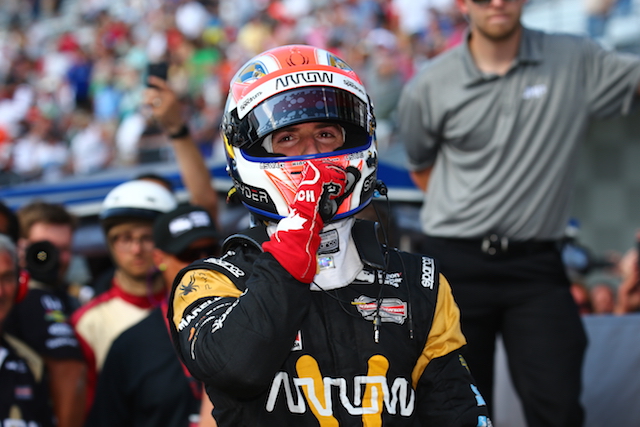 Indianapolis 500 polesitter James Hinchcliffe says he holds no fears about pushing the limit ahead of the 100th running of the speedway classic scheduled for Sunday (Monday AEST).

A year ago Hinchcliffe emerged from a life threatening situation following two rounds of surgery after being skewered by a piece of suspension in a practice crash at The Brickyard.

His life had teetered on the edge and the Canadian did not make a return to the cockpit until four months after the macabre accident when he had a single day test at Road America.

When quizzed about how he has changed mentally and physically since returning to the IndyCar Series at St Petersburg in March, Hinchcliffe revealed he is more battle hardened for the 200-lap affair.

“I think I went into this season as fit as I’ve ever been,” told Speedcafe.com.

“We’ve had some pretty physical races like in Phoenix and Barber especially running all green like that.

“My fitness level feels great. I feel better at the end of races now than I ever have.

“So from a physical point of view I came in pretty strong and I’m still in that place.

“Mentally it was tough having a couple of bad races to start the year (19th at St Petersburg and 18th at Phoenix) especially with trying to comeback and get back into the swing of things.

“But now with a few good results under our belt I’m in a great place mentally.”

The Canadian regards the Indy 500 pole winning effort last weekend as rivalling his maiden career win at St Petersburg in 2013.

“Qualifying was just one of those things. I was so driven to push that limit and find that limit.

“The (pole) rivalled my first win at St Petersberg in that it was pole for the speedway, it was my first pole, the 100th pole, the last guy out and what happened is definitely a day that you won’t soon forget.

“For me personally, winning a year on from what happened, if this year was only the 88th running, winning to me would be a big deal,” told Speedcafe.com.

Hinchcliffe said that leading the Indy 500 is going to prove a balancing act.

“It’s a crucial balance because clean air is king but at the same time you are vulnerable and the guy up front is burning the most fuel,” Hinchcliffe said.

“I’ve been been in the lead of this race at 75 percent throttle in the whole of the straightaway and nobody is going by because nobody wants to run up front.

“So I really hope that we get into a rhythm that lets guys race.”

Hinchcliffe has always been a fine student of the sport’s history, admiring the stature of what it means to win the Borg-Warner trophy.

“I think we are racing for the finest trophy in all of sport,” Hinchcliffe said.

“And essentially we are racing for immortality because if you win this race, no matter how many days you have left on this planet, your face is going to be on that trophy for the rest of time.

“As a racing driver to solidify your place in history like that; that is what we are all racing for.”

Hinchcliffe is well aware that the winner of the 100th Indy 500 will be immortalised as much as Ray Harroun who started the tradition by claiming the first event in 1911.

“But I think even 20 years from now most people are going to know the 100th one so there’s a lot of prestige that goes along with it.”