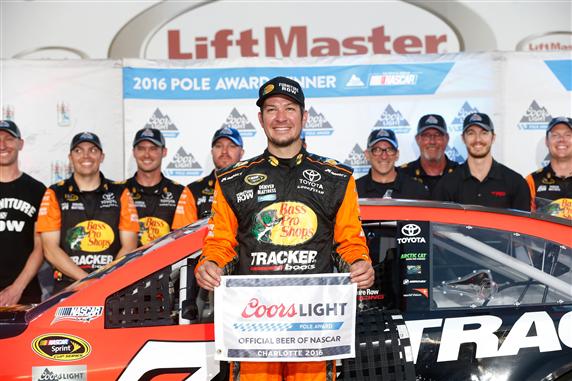 Martin Truex Jr. will start off the point at Charlotte

“I liked what I felt last year and I’ve been thinking about this race a lot since then,” said Truex Jr.

“We had a really good car that day and thought we were going to go to victory lane and got beat on fuel mileage.”

After being the fastest man in the opening two rounds of qualifying, Team Penske’s Joey Logano settled for the second-quickest time.

“We had speed just not quite enough there for the pole,” said Logano, who last week won the All-Star event at the same track.

“But we’ve been getting better here since we started practice. The track is going to change so much Sunday after the sun goes down so we’ll work on things Saturday and be ready to make adjustments when the race rolls around.”

Row 2 will be filled by Ricky Stenhouse Jr. and Denny Hamlin.

Defending race winner Carl Edwards came in ninth on the speed charts in his No. 19 Joe Gibbs Racing Toyota.