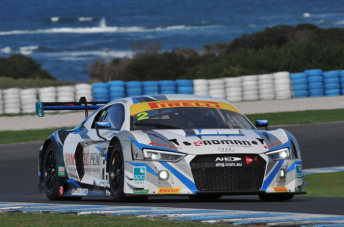 The V8 Supercars star produced a last gasp 1:26.8s effort to edge the McLaren 650S of Shane van Gisbergen to the top spot.

Driving the Steve McLaughlan owned Jamec Pem Racing Audi R8, Tander proved to be just 0.14s quicker than the Kiwi, who held the top spot for the majority of the session.

Factory Audi driver Marco Bonanomi will head up the second row in the #5 GT Motorsport Audi he will share with Greg Taylor.

BMW enjoyed a much stronger showing courtesy of Steven Richards, who put the SRM M6 GT3 in fifth just ahead of the Supabarn Supermarkets Audi R8 of Marcus Marshall.

The Walkinshaw Racing Porsche driven by John Martin and Duvashen Padaychee was ninth, while Nathan Morcom rounded out the top 10 in his McLaren 650S.

MARC GT will start from 11th on the grid for its maiden GT3 race thanks to Bruno Spengler’s effort.

The top 13 runners were covered by a second.

Teams were forced to endure a brief delay before Q2 was given the green light due to a heavy shunt involving Mark Griffith at the end of Q1. Griffith’s Mercedes hit the wall hard at Turn 7.

The Australian GT Championship will return to action on Saturday with two 60 minute sprint races scheduled.

Speedcafe.com will broadcast both races from Phillip Island on Saturday.