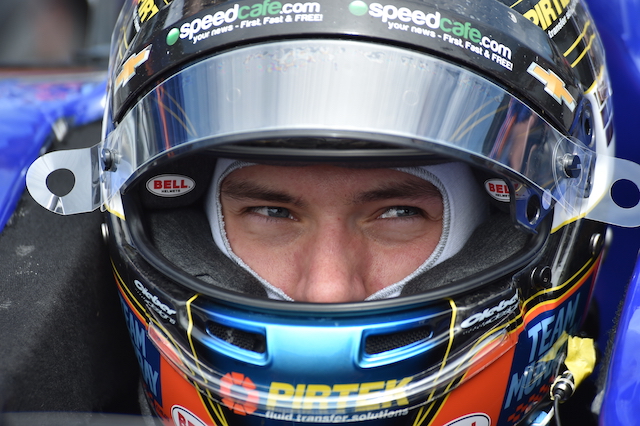 Pirtek Team Murray rookie Matt Brabham’s quest to qualify for the 100th running of the Indianapolis 500 has proven a colossal challenge.

After officially locking himself into the field in provisional qualifying, Brabham completed pole day without a hitch and will start on the outside of the ninth row of the grid in 27th.

The 22-year-old son of IndyCar veteran Geoff Brabham and grandson of Sir Jack Brabham goes into detail about the process of tackling the 200-lap classic for the first time.

In a wide-ranging interview, Brabham gave Speedcafe.com editor-in-chief Gordon Lomas a graphic insight into what his journey has entailed in the build-up to The Greatest Spectacle in Racing.

SPEEDCAFE: Take us through the past 10 days or so at Indy since opening practice for the 500 started?

MATT BRABHAM: It’s been pretty hectic. I was on-track almost everyday for more than a week and these last couple of days is the first break we’ve had really.

There’s also been a lot of media appearances and photo shoots and while the schedule is gruelling I wouldn’t swap it.

I’ve got a different respect for the race being a driver than being spectator as I was the last couple of years.

Practice, engineering meetings and then straight to media events, there’s been no time to rest.

SPEEDCAFE: From the outside at least there doesn’t look like too many things have gone wrong. It has been a steady build-up and you qualified which was a big step. Are you happy to be starting 27th?

BRABHAM: Overall I’ve been pretty happy and excited about being in the race. But as a driver I’m always pushing to do well and do more.

I think we’ve definitely got a lot more on the table to offer. Since I’ve been here I’ve been pretty comfortable and I never really had those kind of ‘oh shit’ moments.

I feel confident and pretty strong in the car and how it is all working.

We just need some more speed out of the car and all of us on the KV side (Sebastien Bourdais and fellow rookie Stefan Wilson) have been struggling with that.

It’s been a hard slog to try and find out what’s been missing. There is definitely something there that is not quite right.

We’ve been flatout working with the engineers having a lot of meetings and trying to figure out what we are missing there in the speed area. SPEEDCAFE: One of the big challenges for a rookie is the lack of experience in traffic and the dirty air it throws up. Can you give us a better understanding of what occurs in the car in that scenario and how it affects you physically?

BRABHAM: It’s crazy. It is something I had no idea about. Even in Indy Lights I didn’t feel anything like what I’ve felt this past week.

The turbulence that comes off a car is so powerful. You get one or two cars and it is just okay and your head is vibrating.

You can see visually and feel the forces and every little puff of dirty air that comes off a car, you feel it.

It moves your car around and it is hard to keep it in a straight line.

Then you get 10 cars or 20 cars and if you are behind that many cars you literally can’t even see the road in front because it vibrates your helmet.

It vibrates the whole car and it feels like all of a sudden you’ve got four square wheels on.

It is daunting because when you are going 230 mph (370km/h) and you start feeling a car that shakes that much, you automatically think something is wrong.

But really it is just the turbulent air so you have that vague feeling of going into a corner and think, is something broken or not or is that just the turbulence? I think it is pretty daunting to deal with that.

The experienced guys that have been here and raced a lot of times definitely have that edge, especially in traffic.

They can really press through it and not let it affect them and that’s what I’ve been learning to do, to get the timing right and everything that goes along with that. 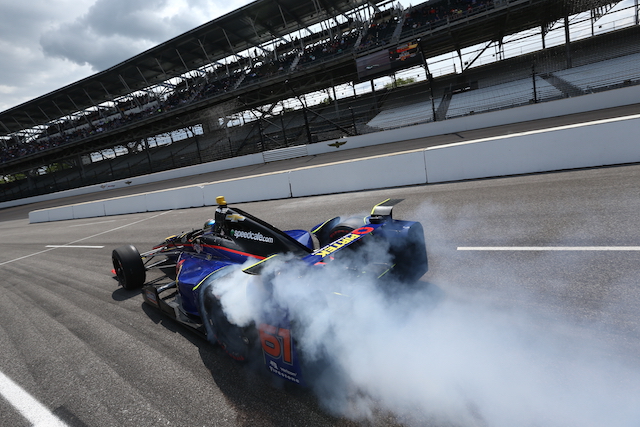 Firing out of his pit box during a practice session

SPEEDCAFE: With the turbulence creating so much havoc with the car it must be a challenge from a feedback point of view whether the car is handling properly or it is in fact just the aero effect from traffic?

BRABHAM: Yeah it is tough but it is all part of it. That’s where you kick in as a driver and you’ve got to separate what the car is going from the outside factors that are affecting it.

I think we’ve got a fairly good grasp on what our car has been doing and we’ve got to slowly working on it and improve it.

Having said that when I first went out it was quite daunting and I definitely struggled after doing a lot of test days.

After doing the running we did in practice the day after qualifying earlier this week I feel quite comfortable now in traffic.

I felt like I could run with all the guys and even pass and move up through the field.

I’ve definitely got a grasp with the timing and the Indy Lights race (2014 Freedom 100) helped with that.

I had the strongest car in that Lights race and was able to pass people. I don’t think it will be any different for this race. It’s just a matter of getting the car right.

SPEEDCAFE: Can you give us an idea of what the feeling is like when the team starts trimming the car and taking the downforce away for qualifying?

BRABHAM: It’s kind of a weird feeling for sure. When the car has got a lot of downforce the car feels really solid and you can run a little bit more varied lines and get away with it.

You get that light feeling and you can feel the car kind of slide through the corner. You just have to drive it so that when it does slide you are still going to make it through the corner without anything happening.

It’s a bit daunting sometimes when they are trimming out and you’re not sure how that car is going to feel into Turn 1 but it’s been okay so far. 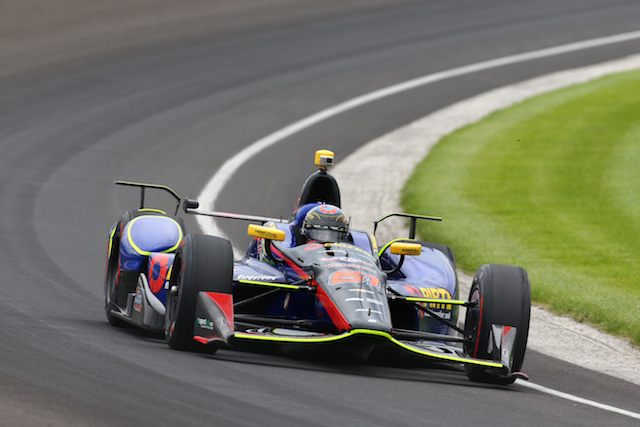 SPEEDCAFE: Looking at some of the vision from Practice 1, your lines were totally different than they are now.

BRABHAM: Yeah absolutely. I think the line changes a bit as the week goes on. It’s been getting tighter and tighter and you have to be more on it.

It was more forgiving when I first started. For us rookies it is really hard to slow your brain down and get your line right.

If you breathe on the steering wheel then all of a sudden you are five feet wider and then you are in the wall. It all happens really quick.

Every corner, every entry and turn-in point is at 230 mph (370 km/h) and that is quite different to a road course where you’ve got time, you brake, you slow down for the corner.

If you turn in slightly offline you can bring it back straight away. Whereas if you get it slightly wrong on an oval the mistake is just magnified drastically.

You have to be so mentally on it on every lap of this track. Every driver talks about how mentally draining it is and that’s because you have to be that more focussed on your line.

I’m definitely getting more used to it as time goes on and my lines have improved.

That’s been a big learning process from Rookie Orientation day to now. 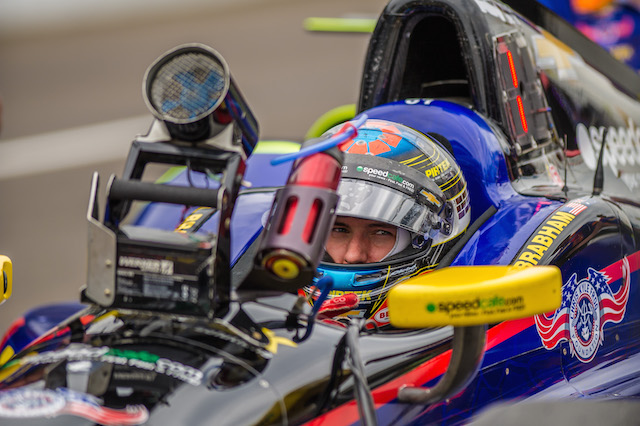 SPEEDCAFE: You have some pretty experienced people in your corner like your dad Geoff. Who have been some of the other experienced Indy heads who have been offering advice?

BRABHAM: The biggest help comes from Dad. He is with me every step of the way.

And the experienced guys on the team like Andy Brown (engineer) and Mitch Davis (team manager) have been a big help with pitstops and sorting out the car.

Dario Franchitti has been a great help and has given me pointers here and there.

To be honest the whole field is really welcoming and open.

It is not an F1-style feel where none of the drivers talk. We are all family, we are all living together in the drivers’ parking lot in the motor homes and there is the Australian bond with Will Power.

They are all willing to help out the rookies because if the rookies are struggling, they are more of a detriment to everyone else so they are not frightened or threatened in helping the new guys out.

There’s never been anyone who has given me the wrong advice and have just been blowing wind up my arse because I’m a rookie and trying to steer me in the wrong direction.

It’s all been very positive.

SPEEDCAFE: You’ve seemed comfortable all the way through what is a massive learning process. Is that a fair enough assesment?

BRABHAM: Every set-up change we’ve had and every time we’ve trimmed the car out there hasn’t been really that scared feeling, maybe it’s because I’m young and dumb, I’m not sure.

There hasn’t been that frightened and conservative feeling, it’s always been pretty confident and solid.

Even when I’ve had little moments I’ve always felt in control and it really hasn’t affected me.

I’m definitely at the point where if we get a really good car we can really stick it to them.