Pride for Rosenberg after Slade breakthrough

Pride for Rosenberg after Slade breakthrough 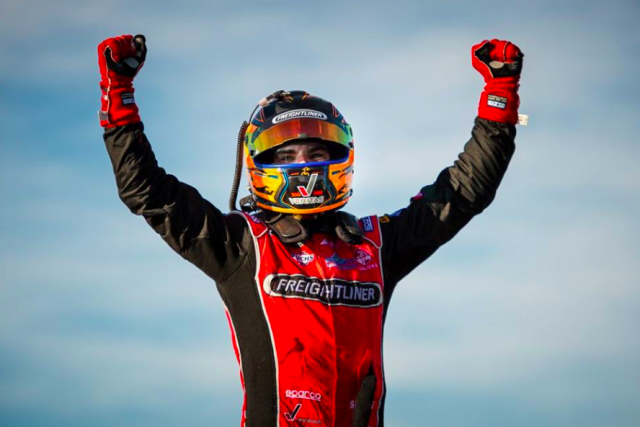 Absent from Winton due to a family commitment, the farm machinery dealer watched on from his Sandy Creek residence in Adelaide’s north as Slade won in his 227th career start. 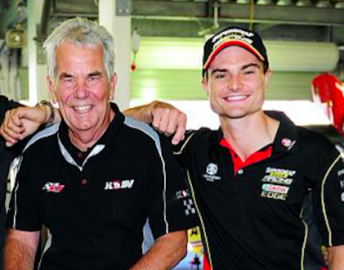 Rosenberg and Slade, pictured in 2014

Rosenberg has played an instrumental role in Slade’s V8 Supercars career, buying cars and ultimately a Racing Entitlements Contract to progress his fellow South Australian in the category.

Although now only professionally involved with Slade through minor personal sponsorship, the two remain close friends.

Having expected the 30-year-old to shine in the family environment at Brad Jones Racing this year, Rosenberg says that Slade will only get stronger after his breakthrough wins.

“He needed a win and, as I said to him afterwards, the monkey is now off his back,” Rosenberg told Speedcafe.com.

“You can’t perform like that every week because the category is so competitive, but I think he’ll go ahead in leaps and bounds now.”

Rosenberg first met a then 16-year-old Slade when the teenager was making a winning Formula 3 debut at Mallala late in the 2004 season.

Impressed by his speed, Rosenberg put Slade in his own car at the start of the following year, running out of Team BRM. 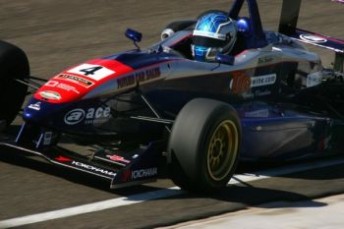 Although circumstances saw Rosenberg pull the pin on the deal after only two rounds, Slade’s reaction to the news would later pay dividends for the driver.

“He was only young and I was pretty tough on him,” reflects Rosenberg.

“But he took it like a man and I’ll never forget that. He thanked me and shook my hand.

“I thought to myself I’ll repay him one day. And I did.”

The repayment came in the form of an ex-Perkins Engineering Holden Commodore VZ, which Rosenberg purchased for Slade to run in the 2008 Development Series.

Slade had gained valuable experience in the category the year prior in ANT Racing and MW Motorsport run Fords.

He took Rosenberg’s car to seventh in the highly competitive 2008 season, winning a race and the round at Wakefield Park.

“He ran the whole show himself and he did a great job,” said Rosenberg of the entry, which was run under the ‘Slade Speed’ banner. 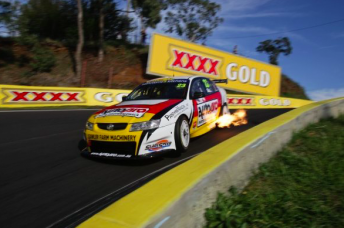 The Slade Speed Holden at Bathurst, 2008

“He prepared it, drove the truck and raced the car.

“That showed to me that he’s very, very focussed and very dedicated.”

Rosenberg upped his commitment to the youngster again for 2009, buying a VE from Paul Morris that enabled Slade to graduate to the main series as the Supercheap-backed team’s second entry.

“He had a very, very trying first few rounds. I think he crashed in about three out of the five,” recalled Rosenberg

“At Hamilton he’d crashed and didn’t even start the second race. I started to wonder if I’d done the right thing.

“But in the later half of the year he came good. He was really strong at Sandown and Bathurst and we committed to the Stone Brothers deal for the next year.”

The Stone Brothers move again required a leap of faith from Rosenberg, who purchased a REC from Paul Cruickshank to slot in as a third entry at the Ford team.

It was an environment that saw Slade’s star steadily rise, finishing 16th, ninth and fifth in the championship over consecutive years. 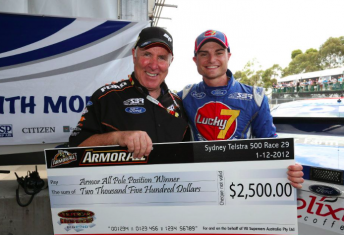 Three years at SBR ended on a high note

The duo would stay with the team for just one year under its new-for-2013 Erebus guise, however, after the switch to customer AMG equipment saw a major downturn in performance.

Partway through that trying season, Slade made the big decision to sign with Walkinshaw Racing for 2014.

Although Rosenberg also ended up at Walkinshaw, running his REC for Nick Percat, it was the end-of-an-era for the partnership.

“We discussed that move in-depth over many, many phone calls,” said Rosenberg of Slade’s Walkinshaw drive.

“He said that leaving me after what I’d done was one of the hardest decisions he’d ever had to make.

The move to Clayton ultimately proved frustrating for both parties. 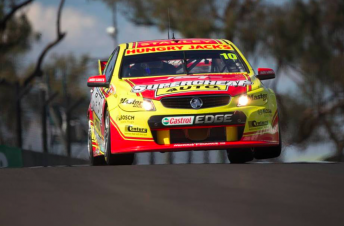 Slade’s struggles for results on track led to what he now describes as the low point of his career, while a battle for funding saw Rosenberg hand his REC back to V8 Supercars at the end of the season.

Not wishing to dwell on the tough times, Rosenberg says he was pleased to see Slade end up at BJR, noting the team’s similatiries to the old SBR.

As well publicised last year, the BJR seat was passed up by David Reynolds as he waited on an answer from Prodrive.

The scenario proved more than fortunate for Slade who, with Supercheap leaving Walkinshaw, had an otherwise uncertain future.

Estimating that he’s backed 35 drivers to varying levels over the years, Rosenberg currently helps a trio of competitors in his other passion, sprintcar racing. 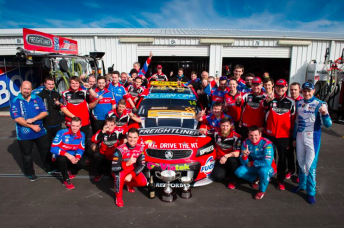 Rosenberg was happy to see Slade move to BJR

When the topic of the cost of progressing Slade’s career is broached, Rosenberg is typically understated.

“I don’t know how much, but that doesn’t matter to be quite honest,” he said.

“You do these things because you can.

“The thing about Tim is that not only is he talented and dedicated, he’s a nice guy.

“His off-track demeanour is exceptional.

“The way he is respected by his peers is a testament to that.”