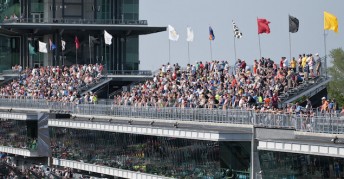 The sell-out of the historic 100th running of the Indianapolis 500 has triggered a suspension of the live TV ban in central Indiana for the first time since 1950.

While speedway officials remain guarded about releasing exact crowd numbers that will fill the enormous venue, it is generally accepted that in excess of 300,000 people will attend the race on Sunday (Monday morning AEST).

It is believed to be only the third time in the event’s history the Indy 500 has carried live TV coverage while ABC affiliate station WRTV in central Indiana will continue its delayed broadcast of the race.

Temporary grandstands have been erected on the inside of Turn 1 and on the exit of Turn 2, such as been the demand for the landmark event.

“There’s no event in the world like the Indy 500 and this sell-out is a testament to the enduring legacy of The Greatest Spectacle in racing.”

Doug Boles, Indianapolis Motor Speedway president, would not reveal a specific crowd number for Sunday, however hinted that it will reflect the halcyon days of CART in the late 1980’s and early 1990’s.

“It is certainly the largest crowd to have been here in the last couple of decades,” Boles said at a specially organised press conference.

“One of the great things about this event is how people have embraced it.

“This is a venue that has hosted millions and millions of people over its (soon-to-be) 100 runnings.”

There are currently no plans to see the live TV ban lifted for the 101st running next year although IndyCar officials have not ruled out the possibility of another suspension to the iron-fisted rule if there is another sell-out.

No Australian driver has won the Indy 500 with Team Penske’s Will Power coming perilously close in 2015 when he was pipped by team-mate Juan Montoya.

Power will line-up on the outside of row 2 in sixth position while Pirtek Team Murray rookie Matt Brabham, a dual American-Australian citizen, will start from 27th position in the 33-car field.