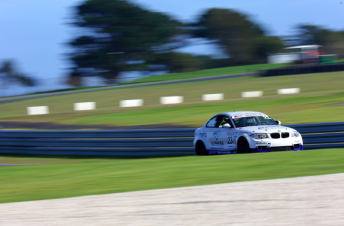 Aaron Seton will join Beric Lynton in his BMW

Aaron Seton and Paul Morris are among 45 drivers confirmed for this weekend’s Australian Production Car Series opener at Phillip Island.

A total of 22 cars have entered the Shannons Nationals meeting, which will feature a 4 Hour Production Car race on Saturday.

The 17-year-old has previous experience in the class thanks to his time with Bob Pearson’s Pro-Duct Mitsubishi outfit.

Morris meanwhile joins Luke Searle in the Roadchill BMW 135i, having acted as a late substitute in the car for Easter’s Bathurst 6 Hour.

Audi TT RS entries for Tony Alford/Stuart Kostera and Mark Eddy/Dean Grant complete Class A, which is notably without any Mitsubishi entries.

The field also includes two BMW135is entered by the category managing Sherrin family, which will compete against a Holden Monaro in Class B.