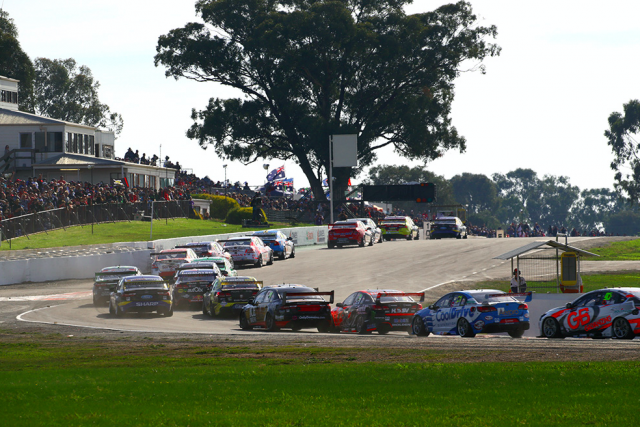 Winton management hopes that ongoing discussions with V8 Supercars and government bodies will yield a long-term deal to continue hosting the category.

The weekend marked the last under the current agreement between V8 Supercars and circuit owners the Benalla Auto Club (BAC), which also acts as the promoter of the event.

Significant changes have taken place at Winton over the last 12 months, including a wholesale management shift and a state government assisted resurface.

BAC CEO Chris Lewis-Williams, who moved into the top role across Winton, Wakefield Park and the AASA last November, is confident that a deal will eventually be reached.

Winton has featured on the ATCC/V8 Supercars calendar 28 times since debuting in 1985. “There’s a genuine desire from us as the circuit, V8s and the region to continue, we’ve just got to work out the deal that makes everybody happy,” Lewis-Williams told Speedcafe.com

“I’d like to do a nice long-term contract so that we do the deal once with a five-year plan.

“My dream would have been to stand on the grid with (V8 Supercars CEO James) Warburton and announce a five-year deal.

“It’s a bit trickier than that, but we’re not miles away.”

While the Victorian State Government contributed $1 million of infrastructure monies towards the recent $3.35 million track works project, the Winton event sits as the only independently promoted V8 Supercars meeting not to receive local tourism or major event funding.

Preparing to pitch for an annual contribution as part of the next deal, the BAC and Benalla Council spent the weekend gathering data for an economic impact study that aims to prove the event’s true worth to the region.

With V8 Supercars not keen to add Winton to the portfolio of 10 events that it currently promotes itself, Lewis-Williams admits that making the raw numbers stack up is a difficult prospect without annual government backing.

He says that the club will be lucky to turn a profit from the weekend despite a strong estimated crowd of 80,000, which included a fully booked out camping area.

“We’ve probably made money (on the V8 Supercars event) once in 10 years,” he said.

“They (V8 Supercars) are an expensive circus and the fee they require to show up is a big fee.

“Our attendance at the weekend was the best for many years, but it’s difficult for us to sell the chunk of tickets required to pay the fee.

“We’re very fortunate that we have 51 other weeks of the year that are good and essentially we use those to float this. But we shouldn’t really be doing that.” Lewis-Williams notes that the level of coverage that V8 Supercars events receive through the category’s current Foxtel deal has only made it harder for independent promoters.

“The coverage being as good as it is has got to hurt the gate, because guys back in Melbourne will go ‘let’s just grab a slab and sit on the couch’,” he said.

Although V8 Supercars has publicly flagged a desire for further upgrades to the venue, Lewis-Williams says that infrastructure planning is currently taking place with a long-term focus.

“We’re working on a 10-year vision and then, project by project, we’ll tick them off,” he said.

“I’d love to do more driver training here, I’d love some kind of TAFE presence. That’s what we’ve got to build.

“The core facility is here, it’s bolting on the other stuff.”

Demand for driver training and track days at the venue is only expected to increase with Melbourne’s Sandown Raceway appearing destined to be sold and closed within three years.