Recapturing qualifying speed is the firm focus for Shane van Gisbergen ahead of Hidden Valley after poor grid positions proved costly at Winton.

Having qualified in the top six for every race across Adelaide, Symmons Plains, Phillip Island and Barbagallo, Van Gisbergen struggled to just 11th and 12th in the two Winton sessions.

Salvaging race results of ninth and fourth, the Kiwi believes he had a car to be right in the fight for victory if he’d started further up the field.

The strong race pace came on a circuit where Triple Eight has not won since the Car of the Future was introduced in 2013.

“The pace was good in both races but we were just stuck behind people,” Van Gisbergen told Speedcafe.com.

“If we started up the front we would have been right in the hunt, but we had to run a different strategy to the leaders to try and get up there and that hurt.

“There’s a lot that goes into it, but we just need to get a qualifying set-up I like for tracks like this.

“We’ve been good in qualifying, not getting poles but always up there, but this weekend we just struggled at this type of track.

“We’ve got a bit to do before Darwin (another high grip circuit).

“I feel like we’re close, but there’s a few things in the car I’m not quite gelling with.”

Lowndes believes that Van Gisbergen will only get stronger as he continues the process of settling in at Triple Eight. 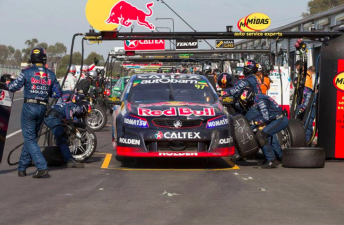 “It’s just him coming to grips with the car and how we set it up,” he said of Van Gisbergen’s Winton qualifying.

“He said after qualifying that the car was a little bit nervous and he didn’t get the best out of it.

“He’s got the raw speed so once he gets his head around it he’ll be fine.

“You’ve got to be confident as well that the engineer is giving you what you want and as much as you need.

“No doubt he’ll get stronger through the year, for sure.”

Poor qualifying also hurt Lowndes on Saturday, where he started 14th and finished 15th, before third on the grid turned to just eighth on Sunday thanks in part to an engine problem.

“I think we had the pace to fight but we had nothing to pass people with,” said Lowndes of his Sunday, which saw him soldier through much of the 200km with a broken header.

“Whether it would have been fast enough (to win), who knows, but we learnt a lot across the weekend about set-up and tyre life.

“We improved it a lot from Saturday to Sunday which we can take forward to Darwin.”

Whincup had an uncharacteristically quiet weekend, turning a ninth and an eighth in qualifying into a fifth and a ninth in the races.

“You can’t do good things if you don’t have pace and we just weren’t fast enough,” he said.

“We have some time before Darwin, so we need to go back to the workshop and figure out what went wrong and how we can get some of that speed back.”