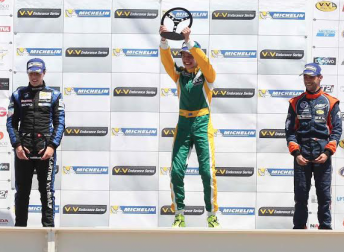 Tasmanian Alex Peroni continues to lead the Formula Renault Monoplace Challenge after scoring a victory at the Paul Ricard Circuit.

Starting from fifth following a collision with Oscar Arcila in qualifying, Peroni charged to the chequered flag in Race 1, winning by 1.9s from David Droux.

Peroni’s hopes of victory in the second race were dashed by a spin while attempting to overtake Droux for the lead.

The 16-year-old fought back to finish fifth before completing his weekend with a third place finish.

Droux came through to win the final two races of the weekend.

The championship heads to Spain’s Aragon circuit for the fourth round from July 1-3. 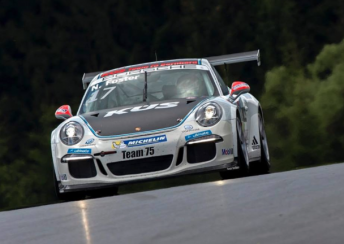 Australian Nick Foster scored two top 10 finishes in the third round of the Porsche Carrera Cup Germany at the Red Bull Ring.

The Queenslander was unable to capitalise on his seventh place grid slot in Race 1 after dropping to ninth following contact which resulted in a spin.

The race was won by Christian Engelhart.

Foster was involved in another hard fought battle in Race 2 that saw him finish sixth having started from fifth on the grid.

Sven Muller took the spoils in the final encounter with the German tied on 101 points at the top of the standings with Engelhart.

Foster is fourth in the championship ahead of a trip to Germany’s Lausitzring from June 3-6. Sebastien Buemi has set up a grandstand finish to the FIA Formula E season by taking victory in the penultimate round on the streets of Berlin.

The e.dams driver was involved in a dice with Jean-Eric Vergne in the early laps before he established a healthy lead which he maintained after the stops.

A late Safety Car threatened to hamper his hopes but in the end he held firm to take the win.

Daniel Abt came through to finish second after refusing team orders to allow championship contender and ABT team-mate Lucas di Grassi through in the closing laps.

As a result, Buemi has now closed to within a point of championship leader di Grassi ahead of the double header season finale at London’s Battersea Park from July 2-3. Starting from third, the BMW driver quickly passed Antonio Felix da Costa at the start before taking the lead from Jamie Green on the following lap.

Once in front, Glock produced a measured drive before and after the pit stops to take the flag by 2.2s from Mattias Ekstrom and Green.

Pole-sitter Marco Wittmann held off Tom Blomqvist to take the spoils in the opening race.

Blomqvist spent the majority of the race shadowing Wittmann’s BMW but was unable to make a serious attempt for the lead.

In the end, just 0.7s separated the pair at the chequered flag with Edoardo Mortara coming home in third ahead of Glock.

Paul Di Resta leads the standings by three points from Mortara ahead of the fourth round at the Norisring from June 25-26. 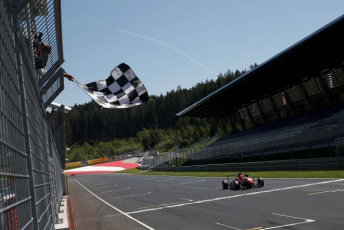 The Canadian produced two lights-to-flag victories as he stormed into a 38 point lead at the top of the standings.

Stroll led home Callum Ilott by 4.8s in the weekend’s final race despite the introduction of the Safety Car just three laps into the encounter to retrieve Mikel Jensen’s car from the Turn 2 gravel.

Maximilian Gunther was unable to maintain the pace of the front runners and finished a distant third.

The victory came after a dominant drive from Stroll in Race 2 that saw the Prema Powerteam driver take the chequered flag by 12.4s from George Russell with Niko Kari in third.

Ilott was awarded victory in the opening race of the weekend which was stopped following a horrific crash involving Peter Zhi Cong Li, Ryan Tveter and Pedro Piquet.

Li sustained four fractured vertebrae and broken bones in his heel when his Carlin car slammed into the back of a slow Tveter, which sent the Chinese driver high into the air before a series of barrel rolls.

Tveter was taken to hospital along with Li before being released with heavy bruising to his knee, while Piquet escaped without injury.

Ilott took the victory from Stroll after coming through a stewards investigation for a move on Gunther who finished third.

New Zealand’s Nick Cassidy finished sixth in Race 1 before suffering a retirement in the second heat. He ended the weekend on a positive note with a 10th place finish in the final race.

The championship continues with a visit to the Norisring from June 25-26. 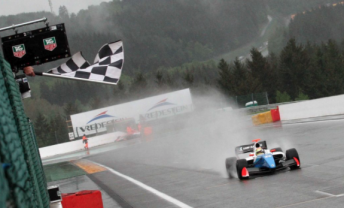 Matthieu Vaxiviere starred in the wet at Spa-Francorchamps

Matthieu Vaxiviere ignited his his Formula V8 3.5 title push by scoring SMP Racing’s maiden victory in the category at a wet Spa-Francorchamps.

Torrential rain provided treacherous conditions with officials electing to start the race behind the Safety Car.

Championship leader Tom Dillmann led from the start which he held after the mandatory pit stops.

However, a spin at Les Combes in the closing stages handed the advantage to Vaxiviere, who went on to take the flag by 6.2s from the recovering Dillmann.

Arden Motorsport’s Egor Orudzhev came through a tense battle with Dillmann to claim victory in the opening race held in dry conditions.

Dillmann was just 0.2s shy at the chequered flag having hustled Orudzhev for the entire 21 lap contest.

Fortec Motorsport’s Louis Deletraz was just 0.8s adrift of the leaders in third.

Dillmann holds a 35 point lead in the standings ahead of the championship’s visit to France’s Paul Ricard Circuit from June 25-26.