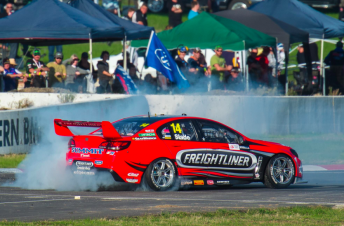 Tim Slade is optimistic that Brad Jones Racing can continue its winning momentum in Darwin, but isn’t making any bold predictions.

The 30-year-old and his Freightliner Holden were the class of the field all weekend at Winton to take the first two victories of his career.

Sunday’s result saw Slade become just the second driver to win multiple races this year, jumping from 14th to seventh in points across the weekend.

The team has its second test day of the season scheduled for the break between Winton and Darwin, where it will introduce more development items to its Holdens.

“It’s so hard to predict because the category is so competitive,” said Slade when asked of the prospect of his Winton form continuing.

“We had an awesome weekend here, but you don’t go into the next race thinking you’re going to clean sweep that.

“Obviously a lot of work and knowledge goes into it, but sometimes there’s an element of luck to go on that as well.

“I think everything just worked in our favour this weekend and we nailed it.

“One positive thing that gives us a bit of confidence heading to Darwin is that Fabs (Fabian Coulthard) had some really good speed there last year.

“Traditionally the BJR cars have worked quite well on the high grip, new surfaces so that gives me a little bit more confidence heading there.

“But we’ll enjoy this and worry about that in a few weeks.”

Slade said he was more confident in the closing stages of Sunday’s race than he’d been 24 hours earlier while attempting to break his 226 race duck.

“It’s true what they say, once you get the first one out of the way the second one is definitely easier,” he said.

“The first one there is still, for whatever reason, that element of doubt in your mind because you haven’t got it done before.

“Your brain is definitely a lot clearer doing those laps in the second race.

“Again I was fortunate that I had a really speedy car and was able to control it to a certain extent and manage the gap.

“Once we started to get close to home I started thinking about burnouts and stuff like that and kind of had to pull my head in and worry about getting the thing to the finish line.”

The South Australian elected to completed his donuts on the dirt at the exit of Turn 10 in a move he says was pre-planned.

“When I as at Walkinshaw with Perdog (Nick Percat) and JC (James Courtney), we joked about doing it on the dirt,” he smiled.

“We said the first one to get a win would do it but their last wins were at Clipsal and there’s not much dirt there!”