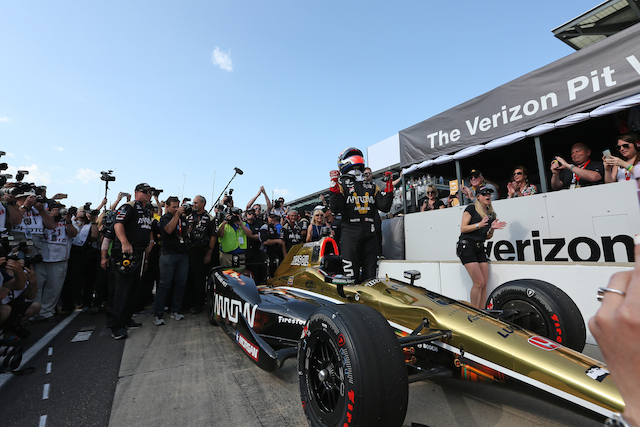 Canadian James Hinchcliffe has produced one of the most emotional fairytales in Indianapolis 500 history by securing pole position for the 100th running of the classic on May 29.

After a near-death experience when he crashed in practice for the race last year, Hinchcliffe produced a sizzling four-lap average of 230.76 mph (371.37 km/h).

Schmidt-Peterson ace Hinchcliffe, the last driver to go off in the Fast 9 segment of qualifying, edged Josef Newgarden (Ed Carpenter Racing) who had set a 230.70 (371.27).

The all-American team turned giantkillers by beating the juggernaut squads of the grid.

“I came into this month hoping we’d have a new story to talk about. I think we did that,” Hinchcliffe said.

“We have the best seat in the house for the start of the Indianapolis 500.

“A year ago they (parents) came here for a very different reason (to see me in hospital). Mum said she wouldn’t miss a single lap this year just in case I tried to kill myself again.” 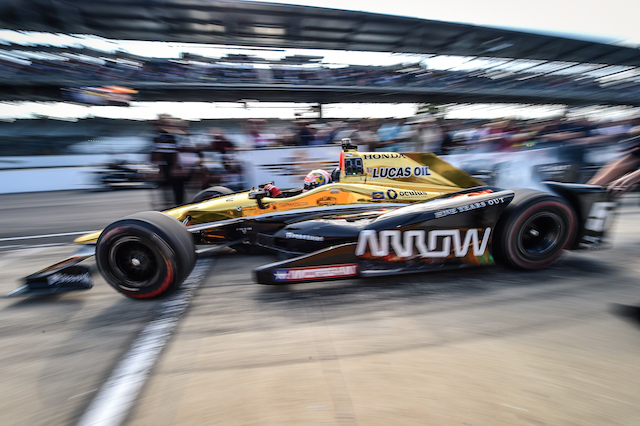 Newgarden’s sizzling opening lap speed of 231.55 (372.64) gave the American the platform to leap to the pole, however he did not bank on Hinchcliffe’s heroic performance.

“With this headwind I was on the limiter into the straight going into fifth and sixth and then held it on the limit all the way through Turn 2,” Newgarden said.

Andretti Autosport ace Ryan Hunter-Reay had a solid run going but just fell short of the pole, clocking 230.64 (371.17) and will start third alongside Hinchcliffe and Newgarden.

Cameo driver Townsend Bell (Andretti Autosport) will start from fourth ahead of Carlos Munoz which sees four of the top five positions held by Honda-powered drivers.

The 2015 Indy 500 runner-up Will Power was the best of the Team Penske runners, by turning an average of 229.66 (369.90) which will see the Toowoomba star start from sixth ahead of Mikhail Aleshin (Schmidt-Peterson).

Series pacesetter Simon Pagenaud will start eighth in his Team Penske Chevrolet ahead of his team-mate and three-time Indy 500 winner Helio Castroneves.