Coulthard: DJRTP progress ‘ahead of schedule’

Coulthard: DJRTP progress ‘ahead of schedule’ 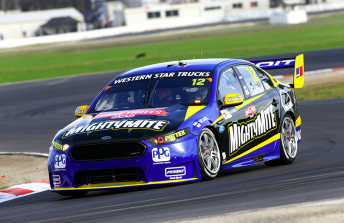 Fabian Coulthard believes that DJR Team Penske has exceeded expectations in the first phase of the season following his latest podium at Winton.

The newly expanded two-car team had blasted out of the gates in Adelaide with two pole positions, but has enjoyed mixed fortunes since.

Fluctuating pace and occasional pitstop and strategy issues see Coulthard and team-mate Scot Pye down in 14th and 16th in points respectively.

Bouncing back from a tough Saturday, Coulthard’s third place in Race 11 added to rostrum finishes for the Kiwi and Pye at Phillip Island last month.

“I would say that we are ahead of schedule,” said Coulthard when asked of the team’s progress.

“There are some tracks coming up where Scott had good success last year.

“I feel like it’s sort of started from this point in the year where the cars start to get stronger.

“But I think if you sat down with everybody at work and Tim (Cindric) and Roger (Penske) in America they would have said the amount of podiums and poles we’ve had at this point in the year that it’s ahead of schedule.

“DJR Team Penske its only in its infant stages so we’ve got a long way to come.

“I think the light at the end of the tunnel is pretty bright.”

Coulthard’s Race 11 podium came in the shadow of a commanding double victory for his former team Brad Jones Racing and the driver who replaced him, Tim Slade.

Although paying credit to Slade’s performance across the weekend, Coulthard says it was no surprise to see the Freightliner Holden in fine form at Winton.

“After driving that car and knowing what it’s like, high grip surface, soft tyres, it just loves it,” he said.

“I’m not surprised. I said to the boys at BJR if you’re going to have any success it’s going to be here and Darwin.

“It’s been good, but to have a fast car you’ve still got to be able to steer it and Tim did a great job.”