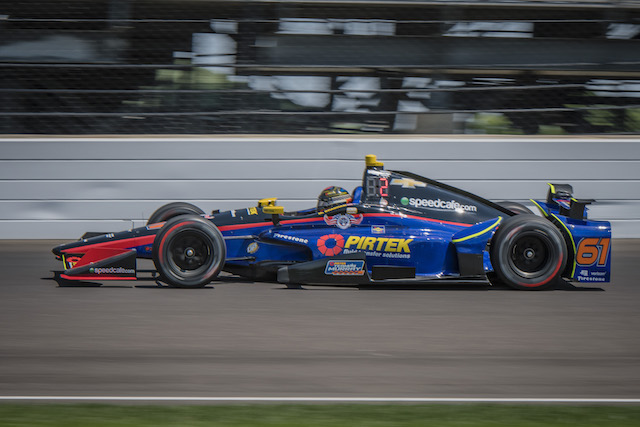 Matt Brabham will start from 27th in the Indy 500

Matt Brabham will start from 27th after completing his solid build-up to the 100th running of the Indianapolis 500.

“It was pretty solid out there today, it was nice to lay down another four clean laps,” Brabham said.

“The weather was quite different to yesterday. It was a lot hotter and a bit more windy out there.

“The laps were good, the car felt great and there were no big moments, so it was all really well controlled.

“The focus now switches to getting the race car ready. We’ve got a lot of things to sort out to get the car good for dicing with everyone else in traffic.

“The Pirtek Team Murray crew are on it and will be busy over the next few days getting ready for the race.

“It’s an honour to say that I’m in the race and going to start the Indy 500 next Sunday.”

The third generation racer’s final run came after he sat in 26th position after provisional qualifying the previous day.

The 22-year-old Brabham has had several leading former Indy drivers in his corner who have carefully assisted back-the-scenes in his preparations over the last week.

Team Murray was conceived by Speedcafe.com owner Brett Murray and is being run by the KV Racing operation which is also fielding an extra entry for Stefan Wilson alongside its full-time runner Sebastien Bourdais.

Brabham, the son of 10-times Indy 500 veteran Geoff and grandson of the late Sir Jack Brabham who had four starts in the classic, was narrowly pipped in the Freedom 100 Indy Lights race by Gabby Chaves two years ago at The Brickyard.

Earlier veteran Alex Tagliani crashed when taking the green flag for his four-lap average, slamming into the pit wall. The Canadian was taken to the infield medical centre but was cleared of injury.