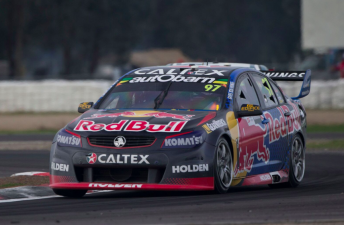 Shane van Gisbergen has been docked 10 championship points for careless driving in Race 11.

The Red Bull Holden driver made contact at Turn 3 with Garth Tander as they battled back in the field following the Safety Car restart.

Van Gisbergen went on to finish the race fourth from 12th on the grid, while Tander finished 12th having started 19th.

The Kiwi remains fifth in the standings despite his penalty, now 86 points adrift of new leader Mark Winterbottom.

Van Gisbergen’s punishment was the only points penalty on a weekend largely devoid of major incidents.

No breach of rules were established in yesterday’s high-speed clash between James Courtney and Cameron Waters that sent the latter spinning into the infield.