Slade and BJR do the double at Winton

Slade and BJR do the double at Winton 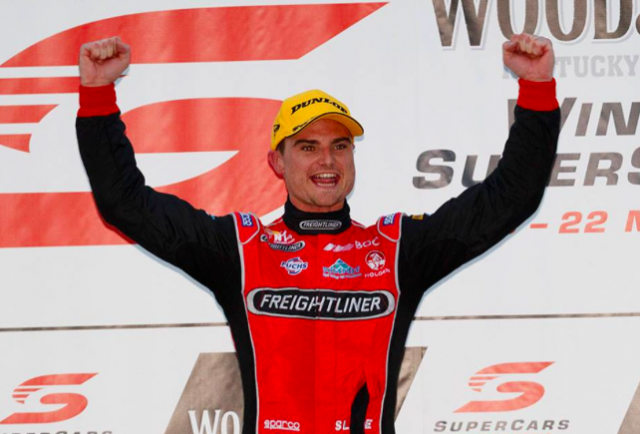 The Brad Jones Racing driver beat Prodrive’s Mark Winterbottom to the win in a battle of speed and pit strategy in Winton’s 200km Race 11.

Before the strategy shuffle unfolded, Fabian Coulthard had won the start from pole-sitter Chaz Mostert, Craig Lowndes and Slade.

Mostert and Lowndes were among those to pit for fuel in the early laps, leaving Coulthard and Slade to duke it out at the front.

Slade managed to leap-frog the DJR Team Penske Ford when the duo eventually stopped together moments prior a Safety Car on lap 19 of 67.

The yellows, which were called to retrieve Lee Holdsworth’s stranded Holden, split the field in two, with half committing to three stop strategies by electing to dive into the pits for fuel.

Making quick work of a short-fuelled Rick Kelly on the restart, Slade subsequently set about building a margin over the field.

Winterbottom meanwhile led the charge of those committing to three stops, making his final trip to the lane just three laps after the restart.

Slade’s superior speed in the middle phase of the race eventually allowed him to pit and rejoin 1.5s clear of Winterbottom with 27 laps to go.

The Holden’s fresher tyres ensured it was never threatened for the remainder, eventually cruising to a 6.8s victory.

Coulthard waited another three laps after Slade before making his last stop and initially dropped into a net fifth before quickly climbing to third.

The Kiwi spent the closing laps on the tail of Winterbottom, who impressively held the position despite his significantly older tyres.

Lowndes appeared strongly positioned early but was forced to soldier to the finish with a broken header on his Holden.

The Supercheap Ford took the Safety Car restart at the back after pitting twice for fuel, subsequently puncturing a tyre when clouting the HRT entry on the way back through the field.

With Scott McLaughlin managing no better than 11th, the results see Winterbottom move to the head of the standings, 27 points clear of the Volvo driver.