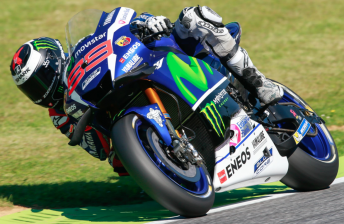 Jorge Lorenzo pipped Marc Marquez to win the Italian Grand Prix by the narrowest of margins as Valentino Rossi’s challenge ended with an engine failure.

The lead changed four times on the final lap as Lorenzo overtook Marquez on the final straight to take victory by 0.019s.

Both Movistar Yamahas started strongly but it was Lorenzo who led out of the opening corner despite starting from the second row.

Rossi made several advances to pass Lorenzo during the opening third of the 23-lap race, but the Spaniard was unmoveable under brakes at Turn 1.

Drama struck moments later as Rossi’s race literally went up in smoke on Lap 9 when his bike blew an engine. Lorenzo had suffered a similar issue during the morning warm up.

Marquez took up the slack and the Repsol Honda rider twice went underneath Lorenzo but could not complete the pass.

A final lap move put the Honda man in the box seat for victory as he exited the last corner in the lead.

However, the Yamaha’s superior acceleration was pivotal as Lorenzo took advantage of a slight wheelie from Marquez to record his third race win of the season.

“When he passed me I thought about staying in second place and taking the points,” explained Lorenzo.

“But I remembered the year 2005 when I was in the 250cc when I passed de Angelis in the last chicane for second place and I thought maybe I could do the same.

“I tried a crazy move and finally my bike was quite fast so I took the slipstream and won this unexpected victory.”

Marquez was pleased with his efforts but admitted that his Honda team has work to do.

“I tried my maximum, I took a lot of risks to win this race but in the last straight Jorge overtook me without lifting,” he said.

“We must still work on acceleration so for the next race we will try to take another step.”

Iannone salvaged third after a shocking start saw him drop from third on the grid to as low as 11th position.

Pedrosa finished fourth on his Repsol Honda after running third late in the race, while Ducati’s Andrea Dovizioso was fifth.

Maverick Viñales finished sixth, having emerged from the start in 11th on his Suzuki Ecstar despite qualifying second.

Lorenzo’s victory doubles his championship lead to 10 points over Marquez, while Rossi is a further 37 points adrift after his second DNF of the season.

The championship now returns to Spain for the Round 7, the Catalan Grand Prix from June 3-5.