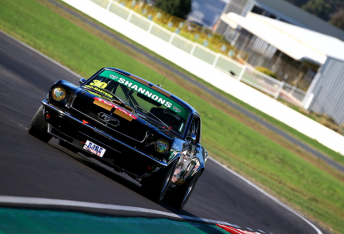 Glenn Seton produced an impressive drive from the rear of the grid to win the final Touring Car Masters heat at the Winton Super Sprint.

The two-time Australian touring car champion scythed his way from 16th to take victory in the reverse grid race, having assumed the lead on the final tour of the 12 lap contest.

Greg Garwood led the early stages before a mistake saw him hand the advantage to son Adam Garwood who held sway until Turn 10 of the final lap.

Seton wasted little time in charging through the field assuming fifth by lap 10, before finding himself in second after passes on Greg Garwood, Cameron Tilley and Tony Karanfilovski.

The final lap saw Seton close on the rear of leader Adam Garwood before he made a move for the lead at Turn 10, which resulted in slight contact.

Seton then went on to take the win from Garwood with Karanfilovski claiming the final spot on the podium.

The reigning series winner completed a commanding win in Race 2 as he led home Jason Gomersall by a 6.8s margin.

Gomersall had led the early laps before Bowe passed the A9X Torana on lap 3.

The Matt Stone Racing driver hung on to finish second despite coming under serious pressure from Seton in the closing stages.

Bowe took the round win by eight points from Gomersall with Seton in third.

The Touring Car Masters heads to Hidden Valley Raceway in Darwin for the fourth round from June 17-19. 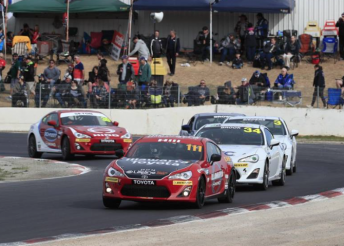 Cameron Hill completed a perfect start to the new Toyota 86 Racing Series by recording a clean sweep at Winton.

The Formula Ford graduate claimed his third lights-to-flag victory of the weekend as he led home Tim Brook and David Sieders.

Once again Hill made a strong start from pole position and never looked back despite the introduction of the Safety Car.

Contact on lap 2 between Jon McCorkindale and and Luke King saw the latter fire off the circuit on the entry to Turn 4.

Heavy damage to the front right saw him stranded in a dangerous position prompting the stoppage.

The battle for third heated up on the restart as Sieders dived underneath Will Brown to secure the position.

While the positions at the front were unchanged for the remainder, there was plenty of action right the way through the 38 car field.

Damon Strongman was involved in a frightening incident when his car caught fire. Luckily he escaped the vehicle unscathed.

In the end, the early stoppage forced a time certain finish with Hill taking the win after eight laps.

The Toyota Racing Series returns for the second round at Sydney Motorsport Park from August 26-28. 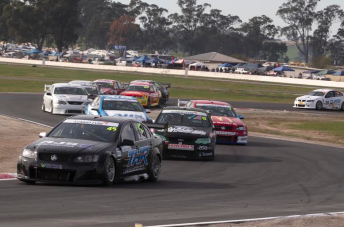 Taz Douglas extended his points lead in the Kumho V8 Touring Cars Series by completing a clean sweep of round two.

Douglas is just the fifth driver in Kumho series history to sweep more than one round of the series – thanks to an unbroken streak of six-straight wins.

“It was one of those weekends you dream of having,” Douglas said.

“They don’t happen all the time so when you get them you have to celebrate them. The boys at THR gave me an awesome car all weekend and the only thing we changed on it were the tyres.

“It was great straight out of the truck and usually when you have a car like that you have a good weekend. The boys did awesome.

“I know the track like the back of my hand – I’ve done a million laps around here – so if I’m ever going to go well somewhere it’s here. Roll on the next round.”

Josh Smith fought back from a poor start, which dropped him to fourth, to finish second ahead of Tyler Greenbury.

The pair occupied the same positions in the round standings.

Matt Chahda fought from 16th to finish fourth as David Wright and Michael Anderson rounded out the top six.

Douglas holds a 63 point lead over Smith in the standings as the series heads to Queensland Raceway for the third round from July 22-24. 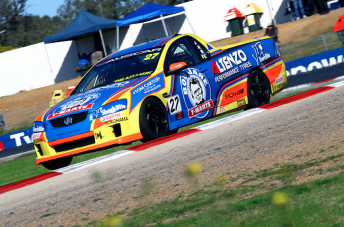 Kim Jane took the round win in V8 Utes

Kim Jane claimed the fourth round of the V8 Utes Racing Series with a comfortable victory in the final heat at Winton.

Jane made no mistakes from pole position as he stormed into the lead from Craig Dontas and Nathan Pretty.

While Jane opened up a lead at the front, Dontas and Pretty fought hard over second spot.

Pretty eventually made a move stick around the outside of Dontas at Turn 8 on lap seven.

The top three held station for the remainder of the race as Jane scored his second win of the weekend.

Kris Walton endured an eventful race which saw him make contact with Gerard McLeod in the latter stages. He would eventually cross the finish line in eighth.

Sieders leads the championship standings by 19 points ahead of the Castrol Edge Townsville 400 from July 8-10.