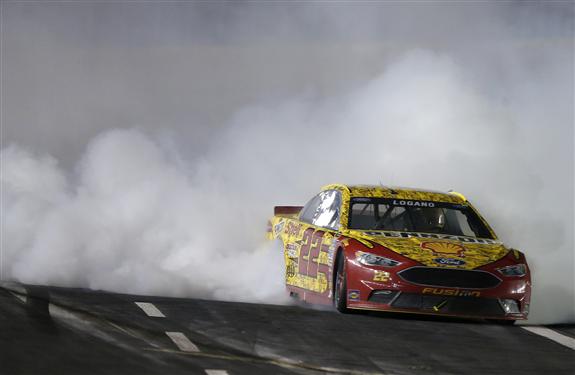 One million reasons to smile for Joey Logano

Joey Logano has outlasted the best in NASCAR to win the non-championship Sprint All-Star event in Charlotte.

The Penske driver won the final 13-lap segment and took home a cool US$1 million prize.

Logano drove through the field on the final restart to pick up his first All-Star Race victory in his sixth attempt.

On a very good evening for Team Penske, Brad Keselowski brought his Ford home in second.

Kyle Larson appeared to be set to pick up his first All-Star win, but lost handle on his race car and slapped the fence with less than two laps to run. He finished back in 16th.

The format for the race, created in large part by the NASCAR Driver Council, featured two 50-lap segments followed by a final 13-lap shootout.

“What a crazy battle for a million dollars at the end,” said Logano.

“This is the All-Star Race. It’s special just to be in the race. Forget winning it, it’s just special. It’s neat to be in Victory Lane.”

The line-up for the final 13-lap segment was setup following a round of caution flag pit stops, with only 11 cars being allowed to pit following a random draw. Missing out on the pit stops were Jimmie Johnson and Kyle Busch who were running 12th and 13th, respectively, after the end of Segment 2. The duo started on the front row for Segment 3, but were quickly passed by cars with fresher tyres.

The talk amongst drivers, crews, media and fans post-race was the format of the event. Many drivers were confused during the running of the race and expressed their frustrations over team radios.

“There was a next-to-last lap pass for the lead. There were several passes for the lead,” Keselowski said. “I don’t know how you can get much more compelling racing that what we saw today.”

The rules for the evening included green flag stops at certain periods in the segments. This worked well unless you didn’t stop under, which was the case for Matt Kenseth in the first segment. He stopped after a caution period when Jamie McMurray hit the wall. He was held a lap in the pits. However, because others pitted under green, as per the rules, they were put a lap down waiting for Kenseth to stop. This meant only 11 cars were still on the lead lap and in effect in contention to win.

It all added to the night, especially when during another segment Chase Elliott attempted to come to pit road and bottled-up the cars behind and caused a major wreck which eliminated both Kenseth and Tony Stewart.

None of these rules will come into effect next weekend when the series stays in Charlotte for the season’s longest event, the Coca-Cola 600.