James Hinchcliffe has soared to the top on the opening day of qualifying for the 100th running of the Indianapolis 500 on May 29.

Schmidt Peterson Honda driver Hinchcliffe leapt into the Fast 9 after unleashing a final qualifying run with just over 30 minutes remaining.

A year after almost losing his life in a horror practice crash at the Brickyard, Hinchcliffe pieced together a withering four-lap average of 230.94 mph (371.66 km/h).

“All the credit to the guys on the Arrow Electronics car; that thing is a rocket ship,” Hinchcliffe said.

“Being fastest doesn’t really mean anything or pay anything, but it’s certainly a nice cherry on top.

“What a difference a year makes. It validates all the effort the guys have put in.

“These cars started getting put together back in February. They put so much effort into the cars for the month of May.”

The qualifying determined which drivers made it into the Fast 9 group who will then run off for pole position tomorrow morning (AEST) immediately following final qualifying to set positions 10-33.

Ryan Hunter-Reay moved into second with minutes remaining in qualifying to ensure a Honda one-two in his Andretti Autosports machine with a 230.80 (371.43) effort.

Hunter-Reay’s effort pushed Will Power back to third after the Australian’s final four-lap average of 230.73 (371.32) was set with just over 20 minutes remaining.

Townsend Bell (Andretti Autosport), who had sat at the top of the scoring pylon before the final runs started with just over an hour remaining, was fifth fastest.

Leading rookie Alex Rossi (Andretti-Herta) had sat in the Fast 9 for much of qualifying before being shuffled back to 10th as the ex-F1 driver continues his eye-catching build-up.

“It is a wonderful feeling to say that I’ve been able to qualify for the race – it is one of those special moments in life,” Brabham said.

“I wanted to get my four laps in very cleanly and not mess it up and ensure that Pirtek Team Murray made the race.

“Once I got in the car and got through the first lap, I felt more comfortable heading into the second lap and it came together from there.”

Rookie Max Chilton and Pippa Mann both experienced crashes the former in practice while Mann’s machine suffered a rear wing failure on her first flying lap in qualifying.

See below for provisional qualify results 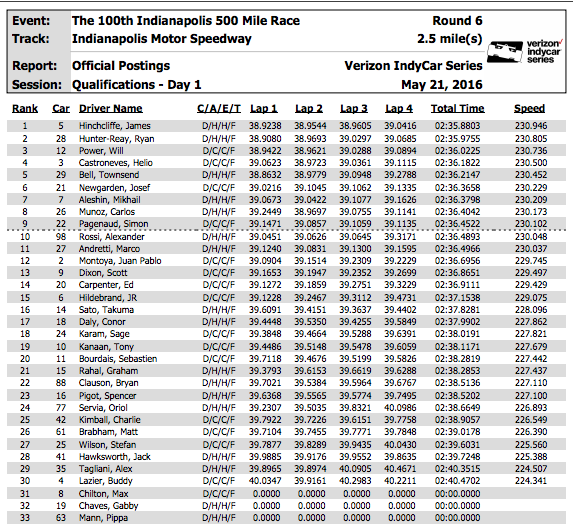