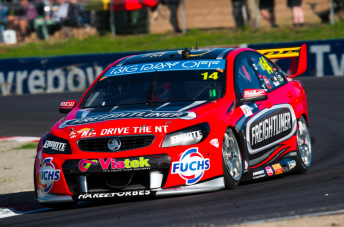 Tim Slade turned pole position into a popular maiden V8 Supercars victory in Race 10 of the season at Winton.

In his 227th career V8 Supercars start, the Brad Jones Racing Holden driver put in a commanding performance to lead every lap outside the pitstop cycle.

Scott McLaughlin tracked Slade through the opening stint before the Holden and Volvo pitted on laps 10 and 11 of 40 respectively.

Slade’s one second advantage doubled in the stops.

The 30-year-old then extended his margin to more than five seconds before cruising to a 4.3s victory.

The result marks the ninth different V8 Supercars winner from 10 races this season.

“I got out of the car and didn’t really know what to do. It’s awesome.

“I can’t thank Brad and Kim (Jones, team owners) and everyone at BJR enough.

“Thanks to everyone who has supported me. It’s a pretty crazy feeling.”

McLaughlin had been the big mover at the start, rocketing from fourth on the grid to second at Turn 1.

The Volvo driver spent the bulk of the race holding off front-row starter Mark Winterbottom, who proved unable to find a way by.

Rick Kelly, Jamie Whincup, Will Davison and Chaz Mostert rounded out the top seven, all finishing nose-to-tail thanks to the Volvo.

Davison was among the last to pit but was robbed of a stronger result thanks to a slow pitstop.

Caruso, Shane van Gisbergen and Lee Holdsworth completed the top 10, while Craig Lowndes had a disappointing run to 14th.

Cameron Waters and James Courtney managed just 16th and 19th respectively after a high-speed collision that will be the subject of a post-race investigation.

The incident occurred after Will Davison emerged from pitlane narrowly ahead of a train of cars that included Michael Caruso, Waters and Courtney.

Waters squeezed the HRT Commodore for room on the exit of Turn 4 before contact with the left-rear door of the Monster Falcon sent the youngster spinning at the following turn.

The results see McLaughlin take over the lead in the championship, 21 points ahead of Whincup.