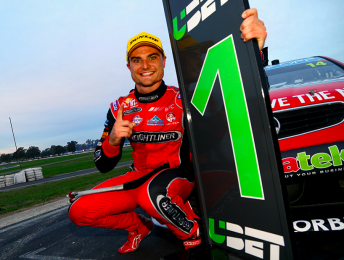 Tim Slade admits that his 227 race journey to a maiden V8 Supercars victory included a ‘breaking point’ that saw him lose faith in his own ability.

The 30-year-old took out today’s Race 10 of the season in dominant fashion, driving from pole position to a near five-second victory.

Three promising seasons at Stone Brothers culminated with fifth in the 2012 championship and a maiden pole position at the Sydney season finale.

While the team’s transition to Erebus Motorsport and subsequent struggles the following year halted Slade’s career momentum, the driver points to the following season as his toughest.

Slade told a packed Winton press conference that he “definitely” doubted himself during his time with the Holden squad as results proved few and far between.

“Halfway through 2014 with Walkinshaw I went through a pretty tough period,” he said.

“Adrian (Burgess, Walkinshaw managing director) was really good and helped me through it.

“The toughest was crashing out at Bathurst and we’d already had a fairly lean run before then.

“That was sort of breaking point for me and luckily we came out at the Gold Coast and had a pretty good weekend there and got a podium.

“There’s been super tough times because you go through that period and you’ve got team-mates who are winning races and finishing towards the front fairly consistently.

“You’re back a bit and you can’t see why you’re back there. When the answers aren’t there that’s the toughest time.

“I felt as though this year, even though we haven’t had fantastic results, we always get back to the workshop and dissect it all.

“There’s never been a period where we were like ‘we were hopeless’. There’s so much potential there, we just needed to put it all together.”

Slade found himself out of Walkinshaw at the end of last year as sponsor Supercheap Auto pulled its sponsorship, resulting in the team’s third Racing Entitlements Contract being sold.

Picked up by BJR to replace the DJR Team Penske bound Fabian Coulthard, Slade now enthuses that he’s found a career home at the Albury-based squad.

“It’s funny because I always thought that BJR being based in Albury was a disadvantage as far as getting good key people there from big cities,” he said.

“Once I set foot in the door there though, it completely changed my perspective on that. I think it’s a massive advantage because everyone just genuinely gets along.

“I stayed with Brighty’s engineer Paul Scalzo the first night I went down to Albury and literally two doors down Brighty’s number one mechanic lives.

“So you walk two doors down to ‘Chop’s’ place, have a couple of beers and a barbie (BBQ) and half the team is there as well, really enjoying each other’s company and having a good time.

“Money can’t buy that and when it’s like that, they really make you feel welcome and part of the team.

“It’s really cool to repay the faith that Brad and Kim (BJR team owners) had to sign me up.

“It’s somewhere that I see myself, providing they’ll have me, for a long period of time.”