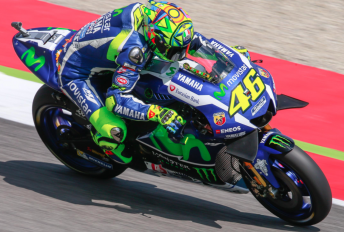 Valentino Rossi will start the Italian Grand Prix from pole position following a last gasp effort in qualifying at Mugello.

The local hero came from nowhere in the final minute of the session to deny Ducati compatriot Andrea Iannone.

Iannone had looked most likely to claim pole after topping all but the rain-affected opening free practice session and the outgoing Ducati rider set the early pace.

Playing a cat and mouse game with Yamaha’s Jorge Lorenzo, Iannone again used the slipstream to go quicker on his second run.

However, Rossi jumped from ninth to first late on thanks in part to a tow from Suzuki’s Maverick Viñales, who will join the Italian at Yamaha next season.

Honda’s Marc Marquez went faster to the second sector on his Repsol Honda after the chequered flag but ran well wide at Correntaio and remained fourth.

Viñales similarly went fastest to the third sector but had to settle for second, leaving Iannone on the outside of the front row.

Rossi’s triumph sent the home crowd into raptures with the pole his first at the venue since 2008.

“It’s something special,” beamed Rossi, “especially because the atmosphere here with all the fans is unbelievable.

“This is very important for the race because here in Mugello starting in front is crucial.”

Marquez will be joined on the second row by Lorenzo, who set his fastest lap after the chequered flag, and Suzuki’s Aleix Espargaro, who came through Q1.

Dani Pedrosa will start his first race since renewing his contract with Repsol Honda from the inside of the third row.

Andrea Dovizioso headed the list of big names failing to progress from Q1, despite his Ducati crew fitting a soft tyre to the front of bike #04 for the second run.

The Italian will start 13th, alongside Pol Espargaro after the Tech 3 Yamaha rider crashed late in the session while leading.

Cal Crutchlow also went down late on and will start 16th on his LCR Honda, with Marc VDS Honda rider Jack Miller 17th.

Miller’s team-mate Tito Rabat will be absent from the grid after he sustained a fractured collarbone following a fall in Practice 3.