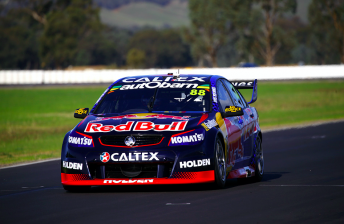 Jamie Whincup on track during practice

Triple Eight team manager Mark Dutton says that a string of mechanical failures during practice at Barbagallo and Winton are the result of the quick turnarounds between events this season.

A battery failure had effectively ended Whincup’s Friday running at Barbagallo two weeks ago, forcing the six-time champion to coast back to the garage.

Adding to the uncharacteristic issues, Winton practice had begun with Craig Lowndes’ co-driver Steven Richards losing a third of his session with a radiator problem.

Although the failures have come following the team’s expansion to three cars, Dutton says it’s the compacted schedule that is putting extra pressure on its processes.

This year has seen the opening six events spread over just 11 weeks, with the logistics of Adelaide, Albert Park, Symmons Plains, Phillip Island, Barbagallo and Winton especially taxing for the Queensland-based squads.

“It’s the quick turnarounds,” Dutton told Speedcafe.com when asked of the unreliability.

“We’re not overly happy with what’s happened. No one would be, but we pride ourselves on the quality of our work and reliability is a big part of that.

“Everything gets brought up. It’s all about having systems in place to double and triple check things.

“If we had more time at the workshop we’d check more things, especially when they’re not regular issues. You don’t check it for checking’s sake.

“That’s what we need to go and back check. Was there any evidence that we should have inspected that arm earlier?”

Dutton affirmed that Whincup’s suspension failure was likely the result of minor damage from a previous event and was not related to the circuit’s revised kerb profiles or increased grip level.

While the recent resurfacing improved Friday lap times by almost four seconds year-on-year, Dutton says the increased grip is not an extra concern for reliability.

“The grip is big, but it’s not stupidly huge,” he said.

“It gives a big lap time change, but it’s not like it’s giving us an extra couple of g-forces in the corners.

“There’s more load, but so far we haven’t had any issues and touch wood we won’t throughout the weekend.”

Despite its issues, Triple Eight proved the team to beat on Friday with Shane van Gisbergen leading the way in Practice 2.

Whincup returned to the track in the closing stages to run third for the session, while Lowndes ended the 60 minutes in fourth place.

The team is this weekend operating without owner Roland Dane, who has elected to remain at home in Brisbane while Dutton assumes full control.

A final 15 minute practice will take place from 1145 local time this morning ahead of qualifying at 1320.