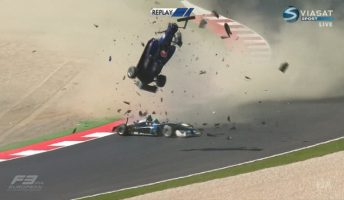 European Formula 3 drivers Peter Zhi Cong Li and Ryan Tveter have been hospitalised following a horrific crash during the opening race of the fourth round at the Red Bull Ring.

The FIA has confirmed that Li has been airlifted to a nearby hospital with possible head and back injuries.

Tveter was taken to hospital via an ambulance where he is due to undergo a further examination on minor injuries.

The Carlin duo were involved in a frightening three car crash which brought the race to a premature end at the Austrian venue.

A spin across the gravel trap from Tveter at Turn 5 saw him rejoin the circuit in a cloud of dust.

An unsighted Li slammed into the back of Tveter’s car, launching the Chinese driver high into the air followed by a series of nasty barrel rolls.

Pedro Piquet was also caught up in the incident but escaped without injury.

Li and Tveter were both transferred to the circuit’s medical centre where it was reported that the former was alert and awake, while American Tveter had sustained minor injuries.

The FIA has released the below statement on the condition of the drivers involved.

“Following on-track evaluation, Zhi Cong Li and Ryan Tveter were transferred to the circuit’s medical centre. One driver was initially unconscious, but both drivers were conscious on arrival at the medical centre.

“Zhi Cong Li has subsequently been taken to hospital via helicopter due to possible head and back injuries.

“Ryan Tveter was taken to hospital by ambulance for further examination.”