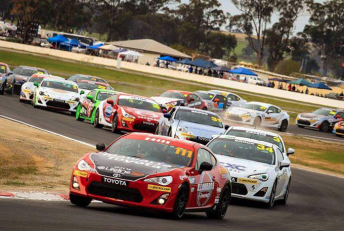 Cameron Hill at the head of the field

V8 Utes regular David Sieders finished third in the opening encounter as he held off Will Brown and Aaron Seton.

The series’ inaugural race proved to be an action packed affair as contact between Damon Strongman and Ben Grice at Turn 8 saw the introduction of the Safety Car on lap 5.

After being spun by Strongman, Grice recovered to finish 21st out of the 38 starters.

Drew Ridge and Josh Hunter also made contact on the restart at Turn 1 which saw several cars take to the grass.

Leanne Tander was the top guest professional in 10th having powered from 20th on the grid.

The second race developed into a much cleaner battle which saw Hill scamper to victory from Brook, while Brown secured the final place on the podium.

Guest professional Glenn Seton was 17th ahead of Steven Johnson in 20th position.

The Toyota 86 Racing Series completes its maiden round with another 10 lap race tomorrow at 1240 local time. 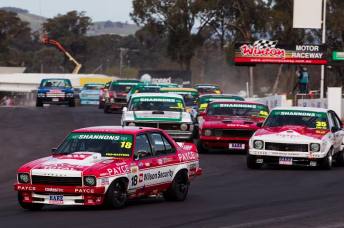 Bowe came under serious pressure from Gomersall as the latter enjoyed a strong run in his newly built Holden A9X Torana.

However, the battle for the lead was interrupted by the Safety Car which was deployed on lap 7 to recover Tony Karanfilovski’s stranded Ford Mustang.

A two lap dash to flag concluded the race with Bowe just holding off Gomersall to score his 79th Touring Car Masters win.

Gomersall’s run to second was his best result in the category which coincided with the debut of the A9X Torana.

Glenn Seton charged to third place from fifth on the grid after passing the Falcons of Eddie Abelnica and Steven Johnson through the race.

He caught the rear of the two leading Toranas but was unable to make any impression on the pair.

Johnson, Abelnica and Jim Richards rounded out the top six. 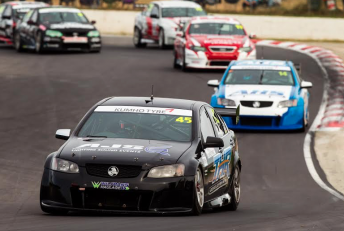 Taz Douglas on his way to victory

Taz Douglas continued his perfect run in the Kumho V8 Touring Cars Series as he scored a double victory at Winton.

The former V8 Supercars full-timer completed a lights-to-flag drive in the opening race having put his THR Developments VE Commodore on pole by 0.08s.

Chris Smerdon drove a solid race throughout to finish fourth ahead of Michael Anderson and Jason Heck.

Douglas was headed briefly in the second heat when Smith jumped the start.

The Brad Jones Racing driver quickly surrendered the position, allowing Douglas back in front where he would main main for the duration of the race.

Greenbury claimed his second podium of the weekend as Smith was demoted to third after receiving a five second penalty for his start-line infringement.

Jim Pollicina was fourth having redeemed himself for a spin at the start of the opening race. Smerdon and Heck completed the top six. 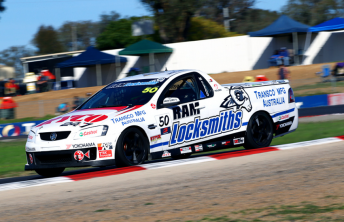 Starting from seventh, McLeod managed to avoid contact in the opening laps to assume the lead on lap 4.

Once in the lead he never looked back and went on to take the chequered flag from Craig Dontas and David Sieders.

Kris Walton had seemingly been on course to finish second before officials handed him a drive-through penalty for contact with Danny Buzadzic.

Buzadzic had held the lead up until lap 4 before he was passed by McLeod.

He was then spun by Walton before being collected by Ryan Hansford behind.

A final lap mistake from Mason Barbera saw him slip from fourth to sixth at the flag, behind Hansford and Jeremy Gray.

Having started from the 13th on the grid, Kim Jane fought his way to seventh ahead of Craig Woods and Nathan Pretty, who were both involved in early race contact.

Polesitter Luke Spalding, who led the opening lap, came through to complete the top 10.

Jane scored victory in the day’s earlier race as he took advantage of a power steering failure for long time leader Barbera.

Barbera had led until lap 7 when smoke began to pour from his Ford Falcon which saw the Queenslander surrender the front-running.

The issue forced him to return to the pits and retire from the heat.

Pretty came through to claim second while Dontas secured the final place on the podium.

Sieders finished fourth following a heated battle with Walton, who was handed a 28 second post-race penalty for causing contact with the former.

The V8 Utes return tomorrow for a final 14 lap heat scheduled to start at 1055 local time.