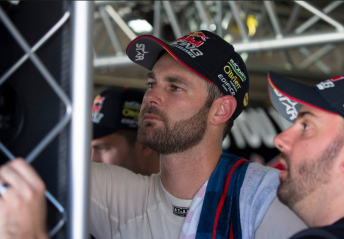 Shane van Gisbergen recorded the quickest time in Practice 2 at Winton as Triple Eight asserted its authority at the top of the order.

The Holden squad moved into the top three spots with five minutes remaining as Van Gisbergen’s 1:19.33s effort was all but matched by Jamie Whincup and Craig Lowndes in quick succession.

Only a late effort from Rick Kelly, who slotted his Nissan into second with one minute on the clock, prevented a Triple Eight whitewash.

The result was a solid rebound for Kelly, who had missed the bulk of Practice 1 with a clutch problem.

All of the top runners narrowly missed out on edging Tim Slade’s 1:19.24s best from the opening session, which remained the fastest of the day.

Cooler track conditions greeted the drivers for the late afternoon running, which was expected to produce fast times.

Dirt being brought onto the resurfaced circuit from the apex of Turn 8, however, appeared to hurt times, with several drivers losing their best efforts as they slid wide of the apex.

Just 0.43s separated the top 10 at the end of the session, with fifth through 10th filled by Fabian Coulthard, Jason Bright, Chris Pither, Mark Winterbottom, James Courtney and Scott McLaughlin.

Despite the final result, it wasn’t all smooth sailing for Triple Eight as Whincup spent 20 minutes garage bound mid-session while the team attended to a suspension problem.

“I felt something a bit odd so we pitted and checked it over but then it finally broke when we went back out,” explained Whincup.

“I think it broke a wishbone. It just pulled out of the housing.”

The session concluded with a test of a new Safety Car system that, when engaged, prevents drivers travelling at more than 100km/h.