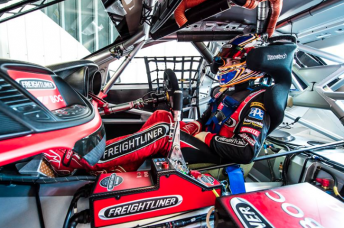 The Brad Jones Racing recruit, who topped pre-season testing at the venue earlier in the year, shot to the top of the order on 1:19.24s two minutes from the end of the hour long session.

“It does feel pretty amazing out there,” said Slade, who sat P10 prior to his late lap.

“It’s good fun and it encourages you to keep pushing because there’s a lot of grip on offer.

“I think on new tyres we’ll get another chunk of time.”

Scott McLaughlin was among a handful of others to move to another set of softs late in the session, falling just 0.04s short of Waters to end up third.

James Courtney and Shane van Gisbergen moved into fourth and fifth in the final minutes, before the latter endured a trip through the dirt at Turn 3 on his final lap.

Seventh placed Todd Kelly spent much of the first half of the session atop the order before Fabian Coulthard, Garth Tander, Waters and ultimately Slade took over the front-running.

Frustrated team-mate Rick Kelly missed the bulk of the session while his team attended to a clutch issue on the Sengled entry.

“Heeling and toe-ing down the gears the clutch was staying in and then popping back out,” explained the 2006 champion.

“It really unsettles the car under brakes so we thought there was no point belting around with the issue.”

Alex Rullo (Lucas Dumbrell Motorsport) and Richie Stanaway (Super Black) were the only additional drivers seen in Practice 1 following their own dedicated session earlier in the afternoon.

LDM made a late decision to give Rullo laps on soft tyres at the start of the hour, leaving primary driver Andre Heimgarter temporarily on the sidelines.