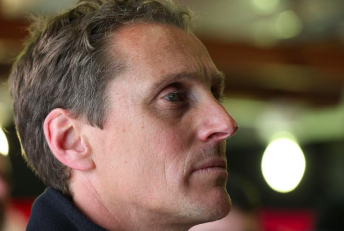 Cameron McConville will today return to the wheel of a current specification V8 Supercar for the first time in three years after a last minute call-up for Winton practice.

McConville is set to steer Nick Percat’s #222 Lucas Dumbrell Motorsport Holden in the 30 minute session that will precede the first primary driver practice.

The 42-year-old McConville, who has spent recent years concentrating on his role as general manager of motorsport for CAMS, says he’s looking forward to turning laps.

“I came up this morning for some Shannons Nationals meetings because we race here in the next few weeks,” McConville told Speedcafe.com.

“Nick sent me a text to ask if I’d brought my gear, which was in the boot of my car.

“They didn’t have anyone down to drive so it was literally last minute.

“I haven’t driven a Car of the Future since Texas, 2013 (soft tyre testing for V8 Supercars), so it’d be nice to jump in and see what it’s like.”

Percat’s regular co-driver Oliver Gavin will return this year for Bathurst and the Gold Coast, but is unavailable for Sandown due to a clashing World Endurance Championship commitment.

McConville isn’t ruling out making a race return at the Melbourne event, but stressed that no discussions about the drive have taken place.

“At Sandown we have Formula 4, which is my priority, so it’d have to work in around that,” he said.

“But I haven’t even thought about that. To be honest if I’m not last today I’ll be happy.

“It’s nice just to have a drive again.”

The team’s second car will be driven in today’s co-driver practice by its 15-year-old Dunlop Series pilot Alex Rullo, provided that he can receive last minute sign-off of the required international license.

Although no deal is done, Rullo looms as the most likely option to co-drive with Heimgartner in the three Pirtek Enduro Cup races.

Twenty five of the 26 V8 Supercars are set to take to the track for the co-driver session, with only Shane van Gisbergen’s Red Bull Holden – which will be shared in the enduros by Frenchman Alex Premat – to remain in its garage.

In addition to McConville, V8 television presenter Greg Murphy is making a guest appearance in the session, making a one-off appearance in Erebus Motorsport’s Penrite Holden.

“These cars change so fast and I haven’t driven one in a testing environment since 2014, for me it’s a little opportunity to get in a feel what the cars are like now and find the limits on a beautiful day on a brand new track surface,” he explained.

“I’ve know Barry (Ryan, Erebus general manager) for a long time and when he asked if I could drive here the timing was good.

“It works for television and if I can give a bit of feedback to Dave so be it, but I’m really looking forward to just getting out there and having a bit of fun.”