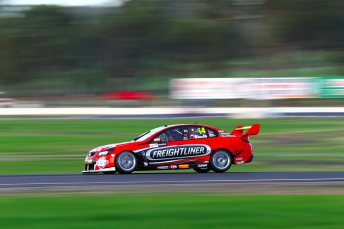 V8 Supercars qualifying at Winton could become a lottery if the issue of debris from corner cutting is not solved, warns Friday pace-setter Tim Slade.

Slade’s record Practice 1 time of 1:19.24s on the recently resurfaced layout proved the fastest of the day as the field failed to improve across the second hour of running.

Drivers noted that dirt being dragged onto the circuit, particularly at the apex of Turn 8, was the cause of the slower times.

Several, including Slade, aborted their green tyre laps altogether after sliding wide on the gravel at the left-hander.

“I think it’s going to be a pretty big issue in qualifying,” said Slade of the problem.

“It could just be luck of the draw in terms of getting a lap in.

“Someone might drag a heap of gravel on the track and unfortunately if you’re the bloke behind it ruins your lap.

“They need to do something because you could just luck out tomorrow in qualifying.”

Teams and drivers were assured in a post-practice briefing that work will be undertaken on the issue tonight.

It is hoped that the Turn 8 apex will be dug out and filled with a solid material.

If such a solution is not possible, a tyre bundle will likely be installed at the apex to discourage cutting.

Several other corners where debris was reported will also be assessed by track officials.

“They’ve told us that they’ll be putting in some big efforts overnight to fix it,” Red Bull team manager Mark Dutton told Speedcafe.com.

“It’s good that they’re addressing it. They’re not putting their heads in the sand, so to speak.

“They had to do something because with the amount of dirt on the track the drivers couldn’t tell what was dirt and what was track.”

It is the second time in three years that the Winton venue has required Friday night work at a V8 Supercars event.

A major effort was needed in 2014 after sealant used to cover cracks in the old surface was torn away by the cars.

Today’s issue occurred despite two multi-team V8 Supercars test days at the venue earlier in the year that showed up the problem at several apexes.

Red Bull’s Shane van Gisbergen emerged fastest in the second session today after making the best of the tricky conditions.

He says that passing will be even harder than usual during the races if dirt continues to be brought onto the circuit.

“I had a few moments on the gravel but carried on with the lap and got it done,” he said.

“I guess it’ll be pretty bad in the races (if a solution is not found).

“All the test days they’ve had with continuous running have been pretty bad.

“You can just see people going off and dragging it back on which unfortunately makes it one line, which makes it harder to pass.

“Hopefully it stays good and we can have some good racing.”

Van Gisbergen however stressed his enjoyment of driving on the new surface when the circuit is clear of debris.

“It’s how the cars should be all the time,” he said of experiencing the increased grip.

“You can drive them hard… normally you’re just cruising around on egg shells.

“They feel like a proper race car now. It’s a cool feeling.”