Penske in no rush for manufacturer deal

Penske in no rush for manufacturer deal 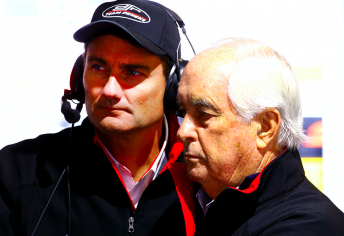 The team has so far been unable to convince Ford to reverse its decision to exit the championship, despite the Penske empire’s strong links with the company’s global bosses.

Penske arrived in Australia for the recent Barbagallo meeting to the news that Volvo will also withdraw at the end of this year, further throwing the spotlight on the category’s value to the industry.

American business mogul Penske is involved with upwards of 50 automotive brands through his dealership networks in the US and says Volvo’s decision was purely business.

“It’s not a surprise to me when you think that Volvo is Chinese owned,” Penske told Speedcafe.com.

“They’re trying to bring that brand back. People look at budgets and marketing value in any particular market.

“These decisions are made at a high level. We are emotional about racing and say ‘why wouldn’t anyone want to go racing’.

“It was a business decision and obviously it’s a disappointment to the team that’s lost them, but we’re here and we’re going to go racing.

“We didn’t count on it (manufacturer backing) when we came here, so we’re building our base of our sponsorship without the manufacturer.

“Obviously we’d like to see some support, but the current management (at Ford Australia) feels that the value is created with other expenditures within the market place.

“I think if you look at GM (General Motors) and Ford, their penetration here is lower than in the past, so I think they’re focussing on other things to grow their market share.”

While Penske’s reputation makes his team an obvious target for any manufacturer looking to enter the sport, the racing veteran insists that his V8 Supercars squad must earn its own stripes before aggressively going to market.

Penske’s primary reason for buying into Dick Johnson Racing was to grow his trucking and power systemes interests in Australia, using V8 Supercars events to entertain clients and customers.

“To be honest I don’t think we have a book that we can go someplace with and say ‘here’s what we’ve done here, invest in us’,” he said when asked if talks with manufacturers are taking place.

“I think we need to have some success and have a track record so we can go to someone and say ‘we’re the team you want to be associated with’.

“In the meantime we’ve taken the benefit of our own businesses and we’re using those businesses to help us grow through the relationship with V8 Supercars.”

Although declining to be drawn into the specifics of V8 Supercars’ Gen2 plans, Penske notes the importance of understanding what fans, not just manufacturers, want when shaping the category’s future.

“I think we’ve got to be sure that we’ve got a product where there’s excitement,” he said of the category’s future direction.

“I’m sure that (James) Warburton (V8 Supercars CEO) and his team are communicating with the fans and finding out what they want.

“We’re a US based company with international operations.

“We’re not part of the rule making, so with Gen2 and Gen3, we have to see what’s coming and react accordingly.

“One of my goals right now is to be the team to beat at some time in the next couple of years.”