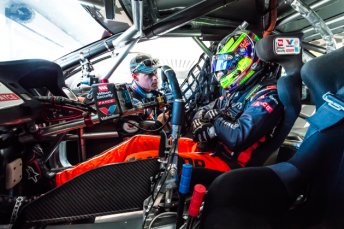 GRM has confirmed Golding’s position in the line-up ahead of tomorrow’s co-driver practice session at Winton, where he is slated to steer James Moffat’s #34 entry.

Team owner Garry Rogers, however, says that the final pairings remain fluid, not ruling out the possibility of linking Golding with Scott McLaughlin.

David Wall continues with the team as a co-driver this year following a full-time campaign in 2015.

“I do not think it matters who races with who at this stage and over the next few months both ‘Bieber’ (Golding) and David will be in and out of both #33 and #34 cars,” said Rogers.

“Both cars are identical in regards to build, except for a slightly different seating position.

“David offers great experience considering the laps that he has not only done in a Supercar, but of course the 2015 season in the Volvo.

“Bieber is obviously young but he did a very creditable job in the 250-kilometre Dunlop Series race at Bathurst last year.”

The 20-year-old looms as a potential replacement for McLaughlin next season, should the multiple race winner complete an expected move to DJR Team Penske.