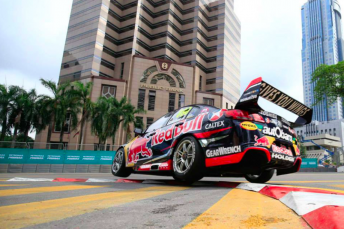 Craig Lowndes on the streets of KL last year

The V8 Supercars fraternity continues to wait on official confirmation of the fate of its August fixture in Kuala Lumpur amid a report that the event has been cancelled.

Local newspaper Free Malaysia Today claims that Mayor Amin Nordin Abdul Aziz has confirmed that the August 12-14 KL City 400 has been abandoned due to an ongoing legal dispute.

V8 Supercars CEO James Warburton flew to KL on Monday to hold meetings with local organisers about rescuing the event.

A V8 Supercars spokesman declined to comment on the claim that the event has now been cancelled when approached by Speedcafe.com.

The V8 Supercars teams, which enjoy a financial benefit from the sanctioning fees commanded for international races, are also yet to be given an official update.

Warburton had told Inside Supercars last week that the category would “make a determination by the end of May as to what happens this year, but the wherewithal from the promoter is for it to be on”.

Uncertainty has surrounded the event for months due to a legal battle over the rights to promote the race.

GT Global, which promoted the inaugural event last year, is suing new promoter City Motorsports after it was appointed by KL City Hall to take over the contract.

KL City Hall has made clear that no racing will take place on its streets unless the legal dispute is resolved.

The category holds a four-year agreement to headline the event, leaving open the possibility of returning in 2017 if this year’s race does not take place.

Despite suggestions that City Motorsports could host the V8 Supercars at nearby Sepang if it is blocked from using the KL streets, such a replacement is thought unlikely, leaving the season at 14 events.

The championship has not raced outside of Australasia since its 2013 sojourn to Austin, Texas.