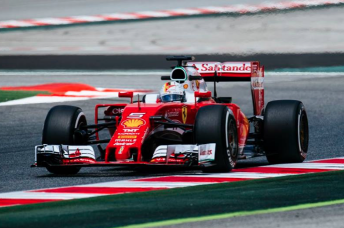 Sebastian Vettel put Ferrari on top of the times on the opening day of Formula 1’s in-season test at Barcelona.

The Maranello squad spent much of the session working on qualifying runs in a bid to rectify their shortcomings in one lap pace during the Spanish Grand Prix weekend.

An afternoon run on the soft tyres produced a 1:23.220s which proved to be the quickest time of the day.

Mercedes’ Nico Rosberg ended the hit out in second just 0.1s adrift of the four-time world champion as the championship leader logged 119 laps.

McLaren’s Jenson Button had set the pace early in the session on super-soft tyres but dropped to third at the close of running.

The Woking squad allocated the majority of the session to mechanical and aerodynamic developments.

Haas F1 were fourth quickest courtesy of a run from Romain Grosjean on the ultra-soft tyres, with the Frenchman 0.4s faster then Manor’s Pascal Wehrlein, who set his time on super-soft rubber.

Red Bull trialled Renault’s new upgraded engine for the first time with Daniel Ricciardo at the wheel of the RB12.

The Australian completed 89 laps recording a best time which was a second adrift of Vettel. Meanwhile, Williams trialled an experimental front and rear wing aimed to simulate the downforce expected to be produced by the new 2017 regulations.

GP2 star Alex Lynn ran the device during the morning running before reverting to the 2016 specification wings.

Esteban Ocon chalked up 105 laps during his run for Renault with the Frenchman set to join Mercedes for the final day of the test.