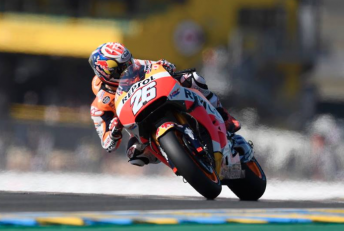 Dani Pedrosa has signed a new contract with the Repsol Honda team keeping him at the operation until the end of the 2018 season.

The 30-year-old had been linked to the vacant seat at Yamaha following the departure of Jorge Lorenzo, however this new two-year deal will prolong his career-long association with the Honda brand.

Pedrosa has scored 51 premier class victories and has claimed a record 142 podium finishes for the manufacturer.

The three-time MotoGP runner-up is glad to extend his stay at Honda with his focus now switching to this weekend’s Italian Grand Prix.

“I’m very happy to be able to announce my renewal with the Repsol Honda Team,” said Pedrosa.

“I’m very grateful to Honda for the trust they’ve shown in renewing with me for an additional two years.

“I think it’s best for me to continue with the company I was with at my very first race. I’m happy that the negotiations have been quick, and now I can just focus on racing.

“I want to give 100 percent this weekend at the Italian GP.”

“We’re very pleased to renew our contract with Dani, and we really appreciate his loyalty to Honda and HRC,” said Nakamoto.

“We’ve been working together for many years, but we always see in Dani the same passion and dedication.

“His experience is very important for helping our technicians to develop our bike, and we’ll do our best to help him to demonstrate all his talent!”

Pedrosa’s commitment to Honda ensures Suzuki’s Maverick Vinales as the favourite to join Yamaha with reports suggesting the deal could be announced on Thursday.

Meanwhile, Ducati is yet to confirm who will partner Lorenzo at the squad next year.