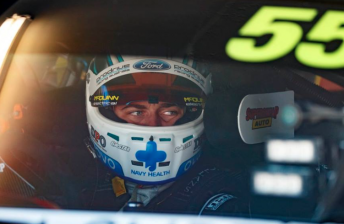 Chaz Mostert says he is edging closer to feeling at one with his Prodrive Ford Falcon FG X as he bids to rejuvenate his season at this weekend’s Woodstock Winton Super Sprint.

The 24-year-old has lacked consistency so far this year, recording back-to-back top 10 finishes just once in nine races.

Mostert has shown flashes of pace scoring two pole positions with his last arriving at the Perth Super Sprint two weeks ago.

However, the Queenslander has struggled to convert in the races with just one podium to his name this season at the Clipsal 500 opener.

Mostert recorded five victories including a triumph at Winton last year before his season was cut short by a horrific crash at the Supercheap Auto Bathurst 1000.

After a breakthrough in terms of qualifying pace at Barbagallo, the Prodrive driver is now eager to join the growing list of 2016 race winners.

“It just goes to show how competitive this championship is to have 26 guys with a shot of winning and already this year we have seen eight different winners from nine races. It is just crazy,” said Mostert.

“I’m looking forward to going out there and hopefully I can get my name on the winners list at some point this year and see what we can do.

“It is just about trying to find my feet and get back to feeling at one with the car.

“We got our qualifying pace back at Perth which was fantastic and now we have just got to work on the race car. We will see what we can do.”

Winton’s new track surface is expected to dominate the headlines this weekend as teams scramble to adapt to the much faster and grippier conditions.

Based in Victoria, Prodrive has already had the luxury of gathering valuable data on the new surface in testing.

It ran a single day at Winton alongside its fellow Victorian teams in February, but did not return alongside the Holden Racing Team, Nissan Motorsport, Garry Rogers Motorsport and Team 18 for a second hit-out prior to Barbagallo.

Mostert’s team-mate Mark Winterbottom is convinced the variable will emerge as a key factor to address in order to achieve success this weekend.

The reigning champion heads into the weekend lying fourth in the championship after claiming his first win of the season in Race 9 at Perth last time out.

“It (the track surface) is three seconds a lap quicker which obviously changes the whole scope of the track,” said Wnterbottom.

“I think we know it well enough to adapt but only time will tell.

“It is going to be the talk of the weekend and it is going to play a massive part. We know the track we just need to get on top of the surface and car set-up.

“The new surface is unproven and we don’t know which strategy will work best until it is played out on Saturday afternoon.”