Australian Anthony Martin surged to his maiden victory in the opening race at the Indianapolis road course for Cape Motorsports with Wayne Taylor Racing.

Martin converted victory from pole, which he inherited after fellow Australian Luke Gabin (JAY Motorsports) had his time disallowed when he failed to acknowledge the chequered flag.

Thompson clinched the final race to extend his Championship lead after beating Franzoni with Gabin third.

The next round is at Lucas Oil Raceway at Indianapolis on May 27. 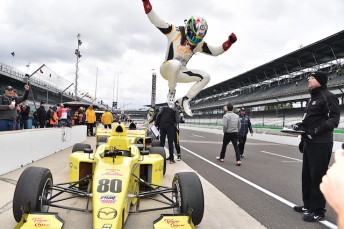 Jake Parsons backed up his maiden podium in the Pro Mazda Series with a sixth in the final race.

O’Ward beaten Aaron Telitz by 4.7s with Will Owen third.

The next round is at Lucas Oil Raceway at Indianapolis on May 27. George Russell made it a HitechGP double when he won the second race by a 2.8s margin.

In the signature Pau Grand Prix, Alessio Lorandi outlasted a defiant Lance Stroll to win the 25-lap affair by .4s.

Lorandi, 17, did a splendid job of holding on after taking the pole after Stroll had put him under sustained pressure.

Russell managed to hold Illott out to take the final podium spot.

The next round is scheduled for the Red Bull Ring from May 20-22. 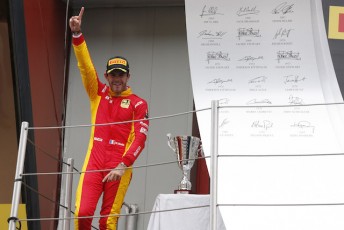 Norman Nato produced a stylish victory to break the ice in the Formula 1 feeder category.

There was drama in the final race when Antonio Giovinazzi suffered a bad crash and suffered a leg injury.

Alex Lynn (DAMS) won the race which finished under the Safety Car. The Ferrari test driver Jake Hughes (DAMS) could not fight back and finished second ahead of Nirei Fukuzumi, Leclerc’s team-mate.

In the second race Alexander Albon beat Oscar Tunjo with Antonio Fuoco claiming third in the lap 17 lap affair to claim his maiden victory in the series.

The next race is at the Red Bull Ring from July 1-3. Mattias Ekstrom has claimed a second successive victory in the World Rallycross Championship presented by Monster Energy at the Kapaza event in Belgium.

A week after winning at Hockenheim, the DTM star lowered the colours of Sebastien Loeb (Team Peugeot-Hansen) and Petter Solberg.

The EKS driver progressed with three maximum scores from the four qualifying rounds.

Loeb’s second place represented his best rallycross finish while Solberg has conceded the lead in the championship for the first time in more than a year. The former WRC champion is five points behind Ekstrom.

The championship moves to Lydden Hill for the British round on May 27. The second heat was taken by Honda’s Nicky Hayden, with the former MotoGP rider claiming his maiden win in World Superbikes. The 83-lap race saw the Mercedes-AMG GT3 take a .9s win over the WRT Audi R8 LMS of Dries and Laurens Vanthoor and Frederic Vervisch.

The three-hour affair saw Laurens Vanthoor bridge the gap on the Mercedes after the final stops.

Queenslander Liam Talbot was running second in class in the Kessel Racing Ferrari he was sharing with Marco Zanuttini and Vadim Gitlin but engine problems late saw them drop out of contention.

Competing in the #22 Nissan GT-R NISMO GT3, Simmons and his co-drivers Romain Sarazin and Sean Walkinshaw crossed the line 22nd outright and seventh in the Pro/Am class.

It was a promising display after the car had qualified 35th outright and 14th in class.

The Queenslander made up a number of places early and was pleased with his initial performance.