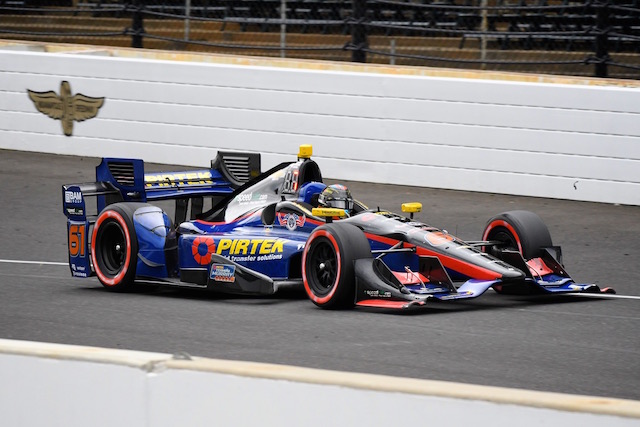 Brabham toiled mid-pack for much of the 82-lap journey before finishing 16th in an superb drive where he gathered valuable mileage in his maiden IndyCar Series start.

As a prelude to his date with the 100th running of the Indianapolis 500 in two weeks, Brabham showed he has the pace to mix it with proven winners on similar strategy and tyres.

By any measure the rookie effort was a consummate success in a largely smooth, polished and clean display from the third generation racer.

In a scenario which was all-new to the 22-year including competition pit stops for the first time and the longest race of his career, Brabham enjoyed a solid Indy 500 preparation.

“I think it was almost the perfect introduction for me to the Verizon IndyCar Series,” Brabham told Speedcafe.com.

“I wasn’t sure how things like the pit strategies were going to play out, having never done a racing pitstop before, but the Pirtek Team Murray guys were on fire with every single stop.

“The start was crazy, I nearly shat myself going into turn one – there was so much stuff that was flying around. The buffeting on my head was unbelievable.

“Due to the crash (Tony Kanaan and Sebastien Bourdais), we were able to get through clean and then settle into a rhythm for the race.

“The whole experience was definitely different, I had never done anything like the restarts, push to pass or pit strategies before, but it all went pretty smoothly.

“It was weird and surprising to be racing and dicing with both Marco Andretti and Will Power there.

“I now know how the guys race each other and the buffeting when you get close to cars and the racing in a group, which was all new.

“The work of the Pirtek Team Murray guys to deliver the car that we had was unbelievable. The stops were flawless and could not ask for anything more.

Brabham started the 3.8km road course Verizon IndyCar Series race on the harder Firestone black tyres, moving to 13th after a handful of laps at the start.

He pitted for the softer compound tyres after 20 laps before rejoining in 21st.

During the second caution Brabham pitted again with the crew supplying him with a set of scrubbed red tyres.
He rejoined in 17th and was managing to keep fellow Queenslander Power at bay before his final pit stop on lap 61 for a fresh set of soft compound tyres.

Brabham will now prepare for his rookie orientation on the opening day of practice for the Indy 500 which starts on Monday.