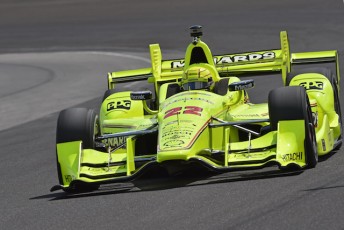 Tackling the 3.8km road course, Pagenaud banged in a record 1:08.68s on his third flying lap top to the Fast 6.

Charlie Kimball (Chip Ganassi Racing) could not respond before his 1:08.98s was good enough to occupy second ahead of Graham Rahal (1:09.18s).

Pagenaud was the only one of the four Team Penske runners to advance, completing the perfect qualifying run in his #22 Chevrolet.

“It’s just about putting the lap together and finding the right balance. I’m polishing my driving and this is the best time in my career so far,” Pagenaud said.

“It is our best qualifying spot of the year. We’ve been knocking on the door these last couple of races,” Hinchcliffe said.

“It was a weird Fast 6 with these Firestone Reds you can only really get one good lap.”

The pole effort has seen Pagenaud extend his lead over Scott Dixon in the standings to 49 points after collecting the bonus point for qualifying fastest.