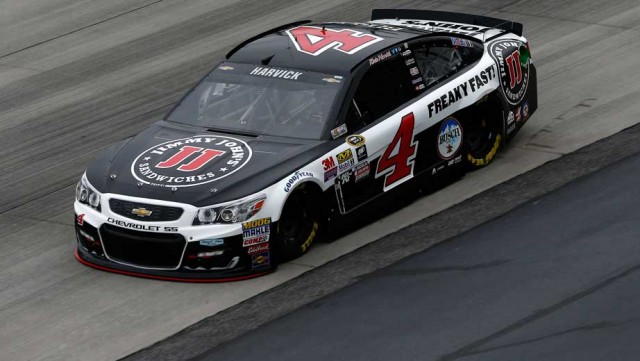 With rain forecast, Harvick went out in qualifying trim and set what would be the benchmark time ahead of Dale Earnhardt Jr.

“I think (the weather) definitely changes the approach,” said Harvick. “That’s what the forecast looked like all week, and we just decided to come in qualifying trim.

“(Crew chief) Rodney (Childers) and those guys made that decision pretty early — I’d say about midweek — to practice that way.”

Despite having crew chief Adam Stevens serving a one-race suspension, Kyle Busch will start from third alongside Carl Edwards.

The big dramas in practice occurred when Danica Patrick had a differential failure while spewed oil onto the track. She crashed along with her team-mate/owner Tony Stewart and Jamie McMurray. All will use back-up cars for the race.