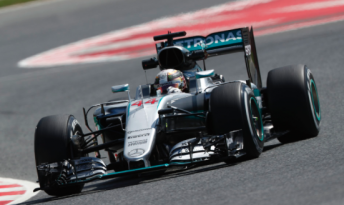 The Mercedes driver saved his best until the dying seconds of the session as he pipped his team-mate Nico Rosberg by 0.2s to record his first pole since the Bahrain Grand Prix.

Rosberg had held provisional pole after his first run but Hamilton dug deep to post a 1:22.000s to edge the championship leader.

“I’m very happy to get the lap as Nico has been very strong all weekend so it was crucial bit by bit that I brought the pace together,” said Hamilton.

“I want to say a big thank you to the team for working so hard over the last two weeks to rectify the issues we have had.”

Verstappen had beaten Ricciardo in Q1 and Q2 before the Australian hooked up a blistering final lap.

Ferrari struggled throughout qualifying with both Kimi Raikkonen and Sebastian Vettel unable to match the pace of Mercedes and Red Bull.

Raikkonen edged Vettel as the Italian squad locked out the third row.

“We didn’t get the car to work the way it should and that is why we underperformed. I’m not surprised (by Red Bull’s pace), we were just too slow,” said Vettel.

Fernando Alonso secured McLaren’s first top 10 in qualifying since the start of the team’s new partnership with Honda last year.

Nico Hulkenberg was the first to miss out on a place in the final part of qualifying with the German joined by McLaren’s Jenson Button, who held a spot in the top 10 before the final moments of Q2.

Daniil Kvyat could only manage 13th on his return to Toro Rosso. The Russian finished ahead of Romain Grosjean (Haas F1), Kevin Magnussen (Renault) and Esteban Gutierrez (Haas F1).

Felipe Massa provided the shock of Q1 as the Brazilian failed to progress to the second segment of qualifying and will start from 17th on the grid.

The Williams driver was hampered by traffic on his first run before a misjudgement from the team saw him fail to post another flying effort.

Massa will start alongside Renault’s Jolyon Palmer, who was knocked out of the session in the final moments.

The last two rows were filled by Sauber and Manor entries.