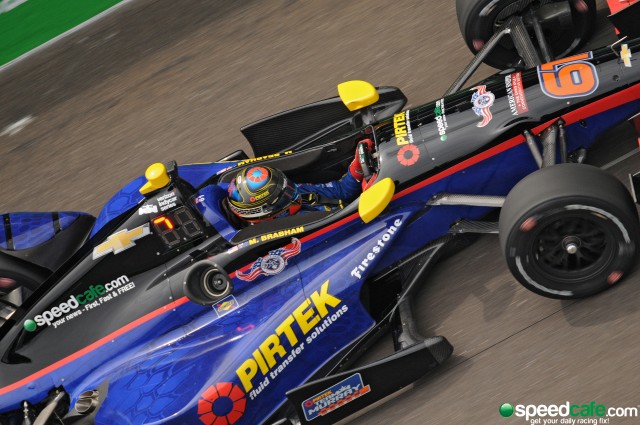 Matt Brabham has produced a promising qualifying run ahead of his maiden Verizon IndyCar Series start for the Angie’s List Grand Prix at Indianapolis.

Embarking on his two-race campaign for Pirtek Team Murray, Brabham narrowly missed advancing to the second round of qualifying after unleashing the fastest lap which was only eclipsed by a late burst from some of his more fancied full-time rivals.

With just four minutes remaining in Group 2, Brabham registered a 1:09.2944 as he completed five flying laps in the 10-minute session.

It was the first time the dual Australian-American citizen had run on the soft compound Firestone Red tyres, demonstrating that he has the pace to fight competitively against the powerhouses of the series.

Brabham, who is relishing his opportunity in the Australian created team that will launch a bid on the Indy 500 on May 29, will start from 16th.

“We only just missed out on making it into the next group. It comes down to milliseconds in this competitive field at the end of it all,” an enthused Brabham said.

“I am still really happy with the performance and with more experience and more laps I’m sure it could have been better.

“Every lap I’m getting quicker and quicker and I still feel as though I haven’t got to the limit yet.

“The Pirtek Team Murray crew is doing an excellent job. I need to keep pushing myself along and work with the guys on moving forward together.

“As long as I can keep getting those laps under my belt and improving, I’m happy.

“To see my name on top was surprising, I didn’t really expect that – even if I was on red Firestone Tyres.

“It’s a special thing to have the #61 and the Brabham name on top of the pylon at Indy – even if for a short amount of time, it doesn’t get better than that.

“The more we’re doing the better we’re getting and we keep improving. I’ve been working on data with Sebastien (Bourdais), he has helped me out a lot.

“For tomorrow, the goal for the race is to keep it clean, stay out of trouble and get a good result.” 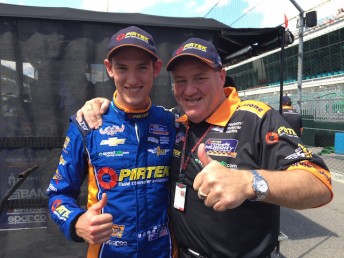 Brabham had earlier registered the 23rd fastest time in final practice of the 25 runners after a problematic opening day hit with mechanical issues.

The late flurry by rivals who had switched to the faster Firestone rubber saw Brabham slip to eighth in Group 2 behind Will Power, Simon Pagenaud, Josef Newgarden, James Hinchcliffe, Graham Rahal and Tony Kanaan who progressed to the second round.

Power produced a sizzling 1:08.67s lap to top the group but it all went awry in the Round 2 to qualify in the Fast 6 when he was caught out by traffic, grazing the wall at Turn 12 and will start from 12th.

Scott Dixon also struck trouble in the scramble missing out on turning a clear flying lap and will start from ninth.

The Angie’s List race starts from 5.30am tomorrow (AEST).