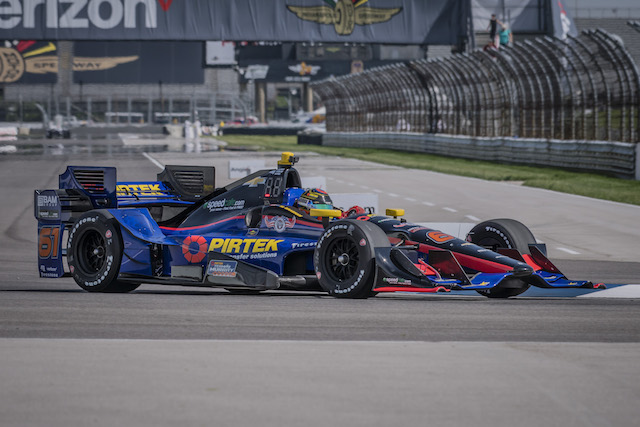 Scott Dixon has blasted to the fastest time after the opening two practice sessions for the Angie’s List Grand Prix of Indianapolis as Matt Brabham struck early mechanical issues.

Dixon completed the second session by surging to the top in the closing minutes with a 1:09.82s effort.

It confined Pirtek Team Murray driver Brabham to his pit box for the remainder of the session after completing a scant three laps.

The opening run was topped by Team Penske driver Will Power who was the only driver out of a 25-strong field to dip under the 1:10s barrier with a 1:09.89s best.

He had logged eight laps early and then spent a lengthy period in the pits while the team sorted through brake issues.

The team made a front wing adjustment and bolted a fresh set of Firestone tyres before sending Brabham out again.

“It was one of those days where we working through a lot of things,” Brabham said.

“It was a brand new car and the guys have done a good job of bringing it together.” 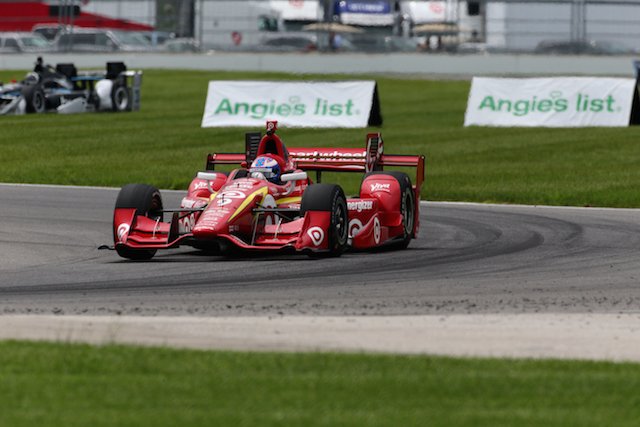 Alex Rossi brought out a stoppage early when he spun his Honda after banking just five timed laps.

However Rossi recovered to dislodge Juan Montoya from the top of the time sheets with 45 minutes remaining before James Hinchcliffe, Power and points leader Simon Pagenaud took turns at the top.

In the end Dixon did enough to shade Pagenaud at the chequered flag with Graham Rahal third best.

Sebastien Bourdais was fourth ahead of Power.

Mikhail Aleshin was sixth from Josef Newgarden, Hinchcliffe and Montoya while Ryan Hunter-Reay completed the top 10.

The first batch of qualifying for the 82-lap race is scheduled for 5am (AEST) tomorrow.

See below full results for Practice 2