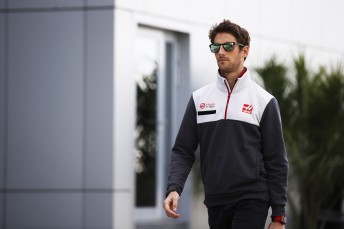 Romain Grosjean is eager to contest a NASCAR Sprint Cup race with Stewart-Haas Racing, the sister operation to the Haas Formula 1 team.

Speculation linking the Frenchman to a possible one-off NASCAR drive has increased with Stewart-Haas Racing reportedly keen to enter Grosjean into a Sprint Cup race.

Grosjean, who joined the new Haas F1 operation this season, has now confirmed his interest, although fitting a race into his packed F1 schedule is likely to provide a potential stumbling block.

However, the 30-year-old says he would prefer to make his debut on a road course, with events at Sonoma (June 26) and Watkins Glen (August 7) conveniently avoiding any potential clashes with F1.

“Definitely I want to do it,” Grosjean told reporters.

“The cars are heavier and more powerful, the brakes don’t look to be the best brakes in the world, there’s a lot of contact as well.

“It’s something we discussed since day one and it would be a great experience.

“You don’t want to start on an oval, I wouldn’t be very comfortable.

“We will find what is possible to do.”

Grosjean will kick off his Spanish Grand Prix campaign today in opening practice, which begins at 1800 AEST.