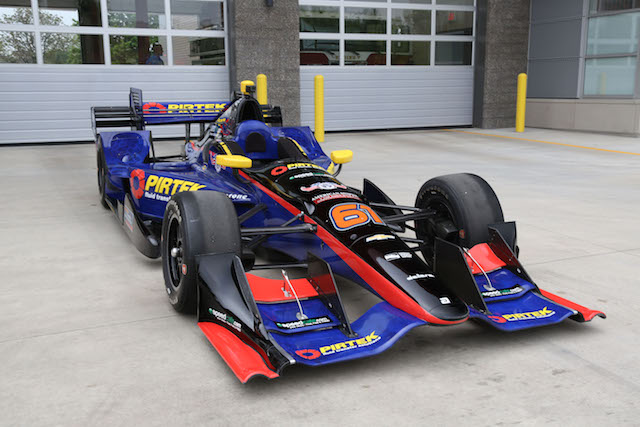 The covers have come off the IndyCar which will propel third generation racer Matthew Brabham to a two-race campaign highlighted by the 100th running of the Indianapolis 500.

Revealed in final livery for the first time, the Pirtek Team Murray machine was rolled out in the road course aero configuration it will run at the Angie’s List Grand Prix at Indianapolis this weekend.

Brabham’s maiden competitive IndyCar outing starts overnight (Australian time) with the first of two practice sessions in preparation for the next leg of the Verizon IndyCar Series on the 3.8km road course at Indy.

Two weeks later the 22-year-old will back up in the Indy 500 with the week-long practice in the run up to the May 29 event starting next week.

The Australian conceived entry was furnished by Speedcafe.com owner Brett Murray and will be run in partnership with KV Racing. Speaking at the reveal at the Indianapolis Fire Department Station 7, Brabham is eager to make his IndyCar Series debut at the road course where he won an Indy Lights race two years ago.

Brabham gained valuable mileage during his only official on-track test day ahead of his double Indy duties late last month at Sebring when he took charge of the chassis campaigned by KV’s full-timer Sebastien Bourdais.

“The test at Sebring was incredibly productive and l learned a lot of stuff that will hopefully translate straight to the track in the Angie’s List road course event,” Brabham said.

“We backed that up with another solid day in a simulator in Charlotte, which introduced me to another way of looking at and experiencing things.

“Pirtek Team Murray and the crew at KV Racing Technology have built a terrific group of guys led by my engineer Andy Brown and team manager, Mitch Davis.

“The history these guys have at the Speedway is well known and they have been amazing in making sure that I am focused on the job at hand.

“I have learned so much from Sebastien (Bourdais) by just being around the team for the opening races of the season as well.”

“There have been a lot of people who have worked hard to make this happen and then there is the amazing support and faith from Glenn Duncan and his team at Pirtek who have been incredible since we made our December announcement.”

Station 7 Battalion Chief Rita Reith and firefighter Ross Meyer were announced as the next members drafted into the CK Crew that will perform in the Tag Heuer Pit Stop Challenge on Miller Lite Carb Day at the Speedway on May 27.

The CK Crew was devised by the Chris Kyle (American Sniper) Frog Foundation along with Warner Bros. Home Entertainment.

The crew is comprised of a mix of seven military veterans and first responders from around the United States.

The 82-lap Angie’s List Grand Prix is scheduled to start at 5.50am on Sunday morning Australian time.