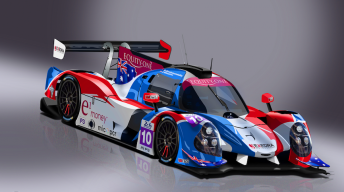 The 44-year-old will join Australian-based Brit James Winslow behind the wheel of a Graff Racing Ligier LMP3 for a one hour encounter at the iconic Circuit de la Sarthe on June 18.

He will now come up against stiff competition with United Autosports announcing last week that it will field an LMP3 entry for former Le Mans 24 Hours winner Martin Brundle.

“When they announced the race I couldn’t help but think that if ever one day I wanted to do the big one then any lap of Le Mans no matter what you are in is going to be invaluable.

“I really had set out to do the Asian Le Mans Series in a LMP3 car but when this race came along I decided to focus on that.

“It would be nice to do well in it but there is going to be some seriously good drivers out there.”

Winslow has been a long time driver coach to Koutsoumidis and looking forward to seeing his pupil accomplish a career goal.

The former two-time Australian F3 champion will dovetail the race with his own Le Mans 24 Hours campaign, driving for the Swiss LMP2 squad Race Performance.

“It’s fantastic to see Dean driving at Le Mans, he has been training hard for this,” said Winslow.

“I’m really proud of his preparation, and huge improvement as a driver over the last two years.

“Dean & I have become great friends & I’m extremely honoured to join him in the Ligier LMP3 car.

“I’ll be driving in the 24 hour also so hopefully we can start my now 25 hours of Le Mans with a podium.”