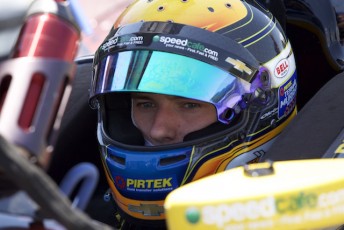 Rookie Matthew Brabham says he is mindful of juggling speed with logging valuable miles at his maiden IndyCar Series start in the Angie’s List Grand Prix at the Indianapolis road course this weekend.

The 22-year-old is one of six drivers facing their first Verizon IndyCar Series start on the road course at the famous venue.

While competing in the top IndyCar class will be new territory for Brabham, he has form at the 3.8km road course having won an Indy Lights race there when he drove a full-season for Andretti Autosports in 2014.

The grandson of three times F1 World Champion Sir Jack Brabham is making his IndyCar main game debut ahead of a booking in the Indy 500 on May 29.

Brabham will drive the #61 Pirtek Team Murray Chevrolet which will undertake the two-race program in partnership with KV Racing.

“I think I am as ready as I can be,” Brabham said, who goes into the race with a marathon test at Sebring under his belt and considerable time in advanced simulators.

“At the end of the day it is about getting as many laps under my belt as possible and learning as much as possible from the experience and the talent that has been built around me.

“We want to have speed, but we also want to bank as much knowledge as we can on things like pit stops and communication before we head to the Indy 500.

“These last six months have just gone so quickly. To have a full-time IndyCar career is the ultimate goal and this month is the next step in achieving that ambition.

The crew are made up of military personnel and first responders and will take part in the Tag Heuer Pit Stop Challenge at Indy on May 27.

The initiative is part of the relationship between Chris Kyle Frog Foundation and his widow Taya, who is the ambassador for Team Murray.

Brabham’s IndyCar program has been put together by Speedcafe.com owner Brett Murray.