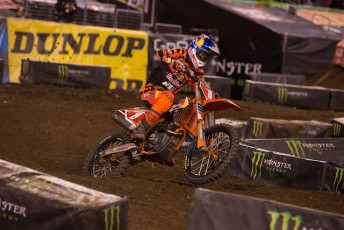 Malcolm Stewart and Cooper Webb have secured the 250 East Coast 250 West titles at the final round of the Monster Energy AMA Supercross Championship at Las Vegas.

In a unique 250 race that saw the West Coast race against the East in a combinedmain event, Joey Savatgy claimed the all important holeshot in the mud ridden circuit and held the position right to the chequered flag.

Second place went to Zach Osborne, followed by Malcolm Stewart in third, who was the first of the East Coast riders.

Stewart’s third place gave him the East title, as title threat Aaron Plessinger finished one place behind in fourth.

Monster Energy/Pro Circuit Kawasaki fill in rider, Gannon Audette, finished off a tremendous season with a fifth place, followed by Colt Nichols in sixth and Tyler Bowers in seventh.

Cooper Webb finished in 11th place, which handed him the West Coast championship by 1 point over race winner, Joey Savatgy.

In the 450 class, Ryan Dungey claimed the win in emphatic fashion, overcoming a mid race collision with Ken Roczen.

Dungey and Roczen were engaged in another mega duel to end out season 2016, before Roczen fell and inadvertently collected Dungey.

Dungey would remount to get the win, whilst Roczen finished in 20th.

HRC Honda’s Trey Canard finished in eighth, followed by his teammate Cole Seely in ninth and Justin Barcia in tenth.

Riders now embark on a 12 round, 24 moto Lucas Oil AMA Pro Motocross Championship, which commences on the May 21 in Sacramento, California.