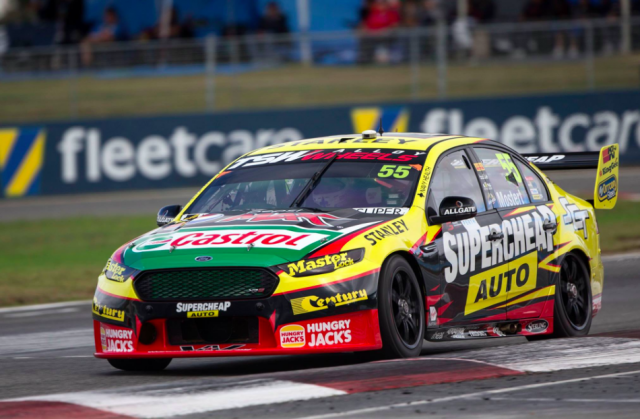 Prodrive boss Tim Edwards is confident his team can fight back against the Triple Eight juggernaut today despite its dramatic struggle for tyre life in Race 8.

A repeated weakness of the Prodrive Fords this season, poor tyre life saw Chaz Mostert and Cameron Waters sink from the lead battle to just 12th and 13th respectively in the 120km encounter.

The slump added to a horror day for reigning champion Mark Winterbottom, who after a delayed pitstop made an uncharacteristic mid-race error and ended the day mired down in 22nd.

By contrast, the Triple Eight and Walkinshaw Holdens rose through to lock out the top six spots in Saturday’s race, with only winner Craig Lowndes having taken the gamble of a two-stop strategy.

“it’s certainly not as bad as it would seem, absolutely not,” Edwards told Speedcafe.com.

“They (Mostert and Waters) raced Gizzy (leader Shane van Gisbergen) a bit hard and used their tyres because clearly Chris didn’t have the same challenges.

“Clearly we’ve got work to do, but we rolled the dice thinking the weather was coming and that we’d all be changing back to wets.

Prodrive had dominated the bulk of the weekend at Barbagallo last year, only denied a clean sweep of three poles and three wins by an ill-timed Safety Car in the Sunday race.

The team remains winless this season, however, with victory droughts for Mostert and Winerbottom stretching back to August and September respectively.

Despite Triple Eight’s stunning form in Race 8, Edwards expects his cars to give the Holdens a run for their money in today’s 200km finale.

“Absolutely we can,” he said of taking it up to Triple Eight today.

“It’ll be a different race, especially if it’s dry throughout as predicted.

“We’ve got two stops and you might even see some do three.

“That’s an option around here because of how fast you can get through the field if you need to, like Craig did.

“I don’t think anyone knows what the pure speed is yet either because we haven’t seen everyone out there on a green tyre.

“We won’t really know where people sit on raw pace until qualifying.”

Winterbottom slipped to sixth in the standings following Saturday’s result, while Mostert and Waters are 14th and 18th respectively.