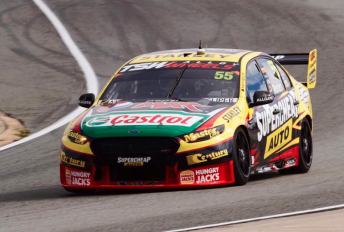 Chaz Mostert scored his second Armor All Pole Award of the season by edging out Craig Lowndes in Race 9 qualifying at Barbagallo.

Chris Pither provided the biggest surprise, popping to the top of the order with a 55.15s ahead of the final green tyre runs.

The Kiwi remained on top until Lowndes went 0.3s quicker with just 90 seconds on the clock.

Mostert had the last laugh, however, bumping the Race 8 winner to second with a 55.05s moments prior to the chequered flag.

“It’s awesome to get this,” said Mostert, who scored a career first pole at Barbagallo last year.

“We’ve been struggling the last couple of rounds so it’s good to reward the boys.”

Mark Winterbottom slotted into third as he aims to avenge a troubled Saturday that netted just a 22nd place finish.

“It’s good to bounce back,” he said. “I drove pretty average yesterday.”

Pither held on for fourth despite failing to improve on his final set of tyres.

“The car has been bang on since we rolled it out of the truck and I’m just building confidence.

“It wasn’t a great start to the year but I knew as a team we were capable of this, I just needed to get the job done.”

“We had such minimal running in the dry in the last couple of days so it was a bit of a swing and a miss I suppose,” he said.